This one has been a little neglected. Part of the reason was that I had made all my favourite blocks from the Threadbear Civil War Bride pattern, and was not sure about others, not sure about elephants and horses (apologies to horse lovers out there) and thinking I might make some more changes to suit me. So...there are changes.
I especially love the fruit bowl in the original quilt  (not included in the Threadbear pattern).
Here is the bowl -  a zoomed in photo of the antique original quilt (in the book Treasury of American Quilts by Nelson and Carter Houck): 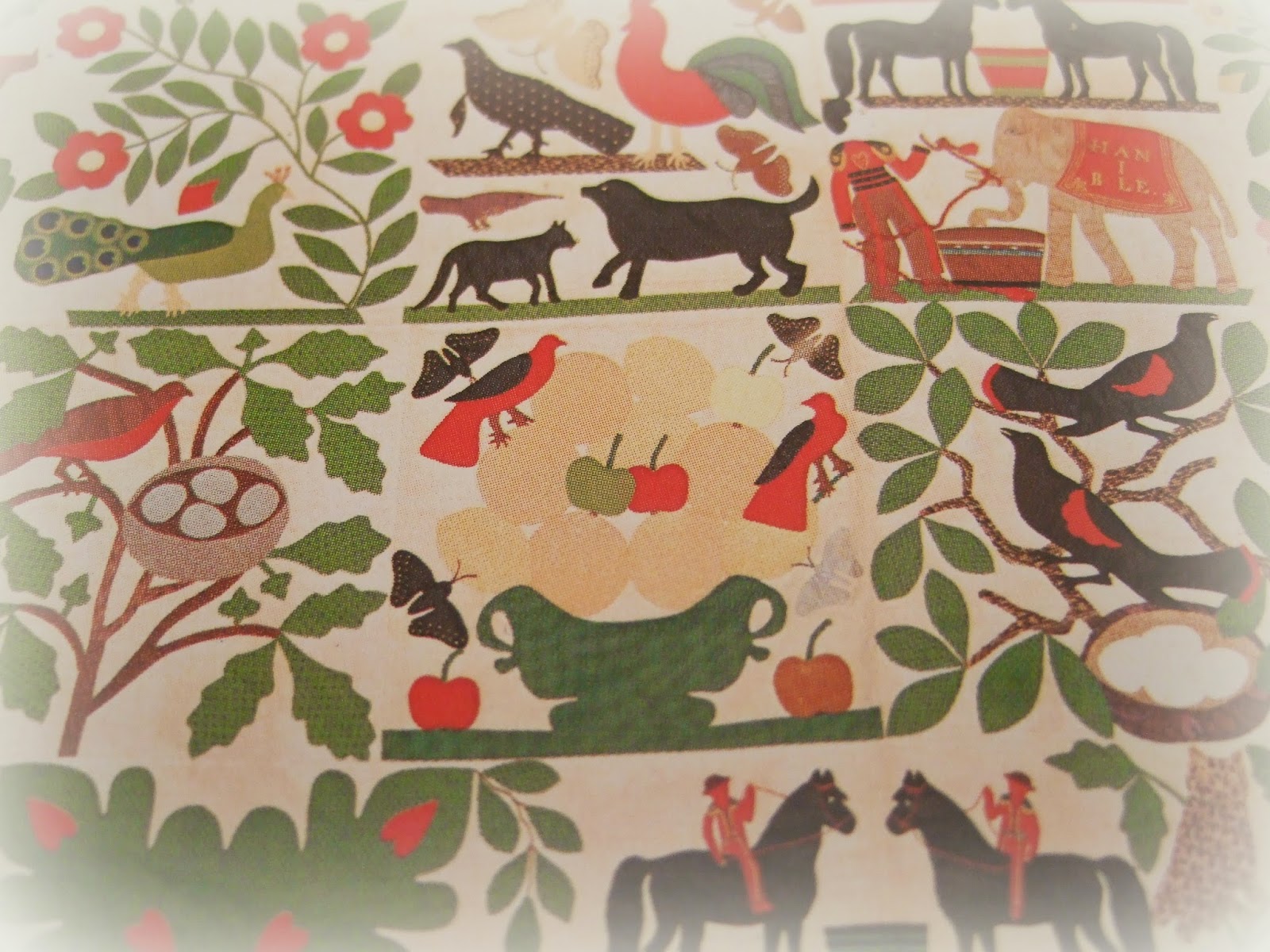 And here is a version of the bowl block in "A Bountiful Life" pattern book: 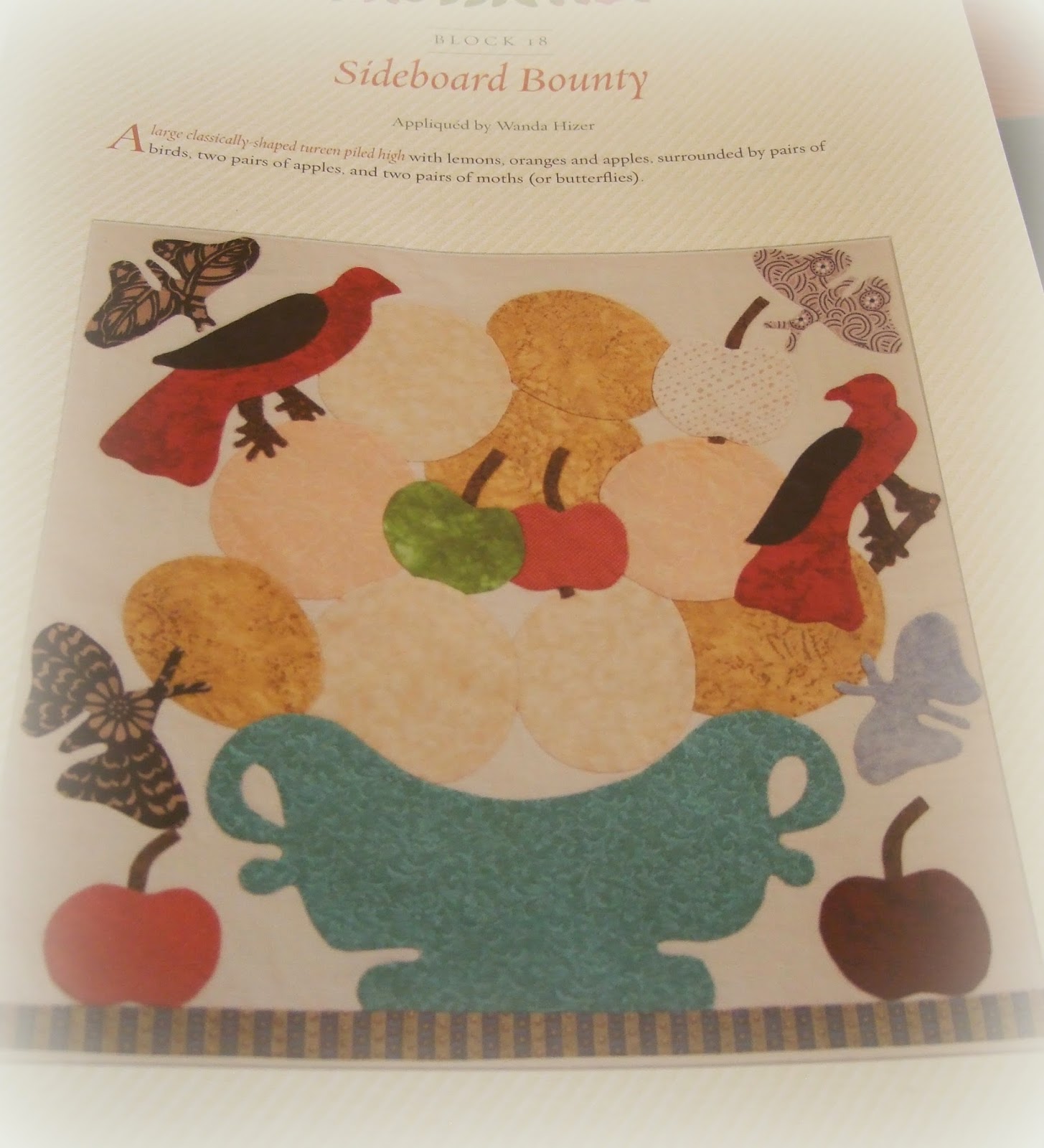 The block in Bountiful Life is a square and I am making rectangle blocks (as in the Threadbear pattern )  - so it was not going to be possible to simply grab a block from Bountiful Life. Some drafting was needed to fit my 15" by 12" blocks. Here's what I came up with: 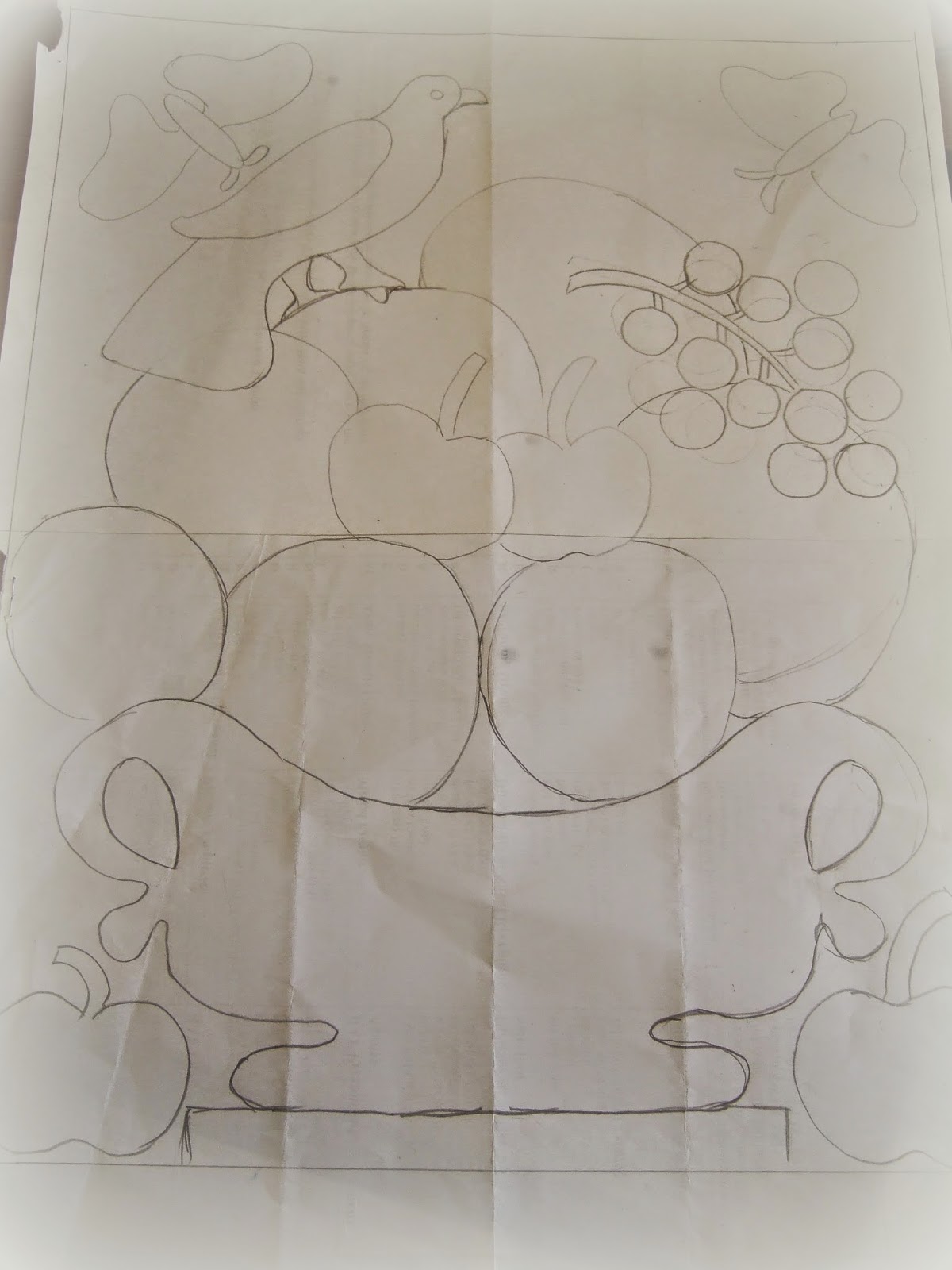 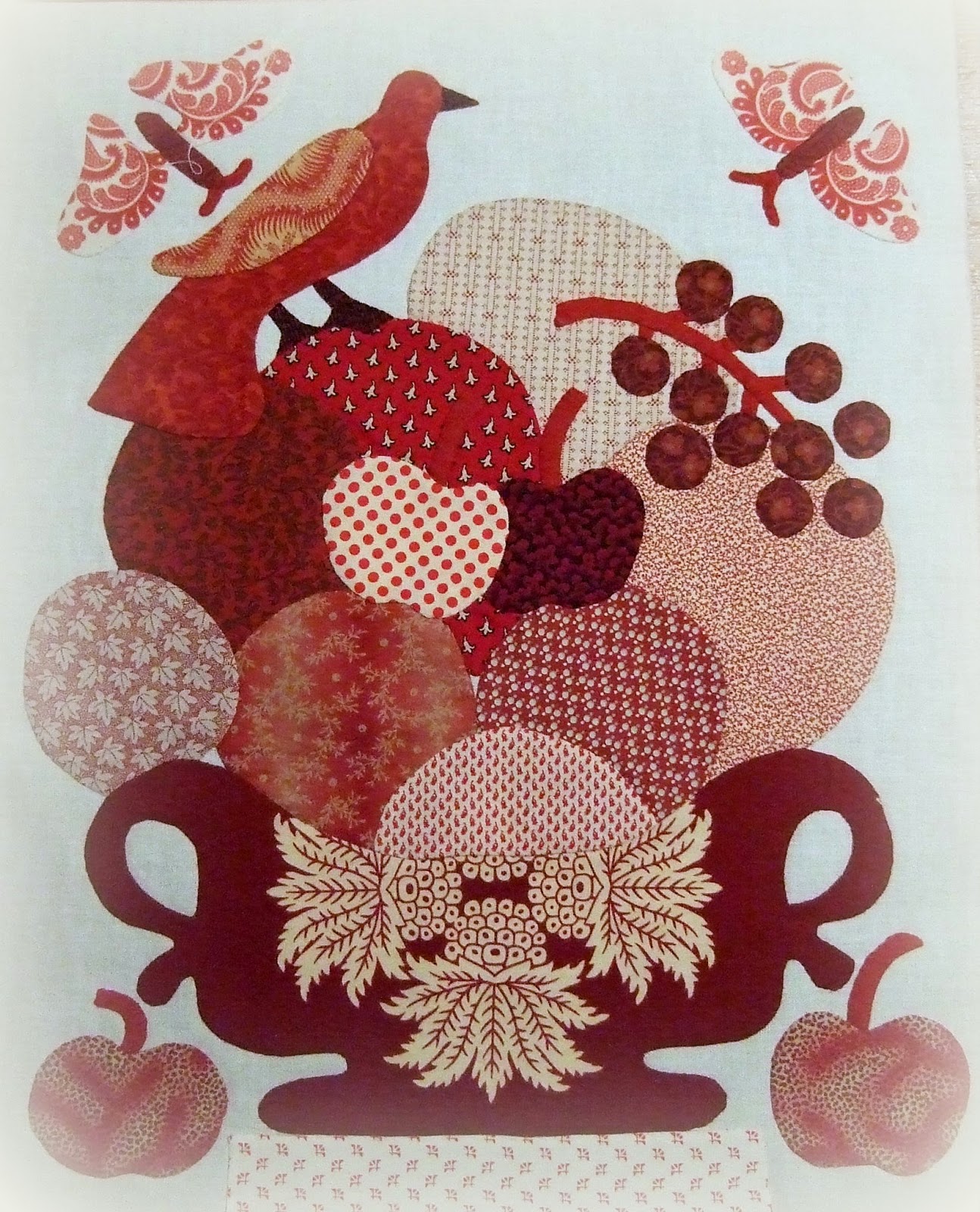 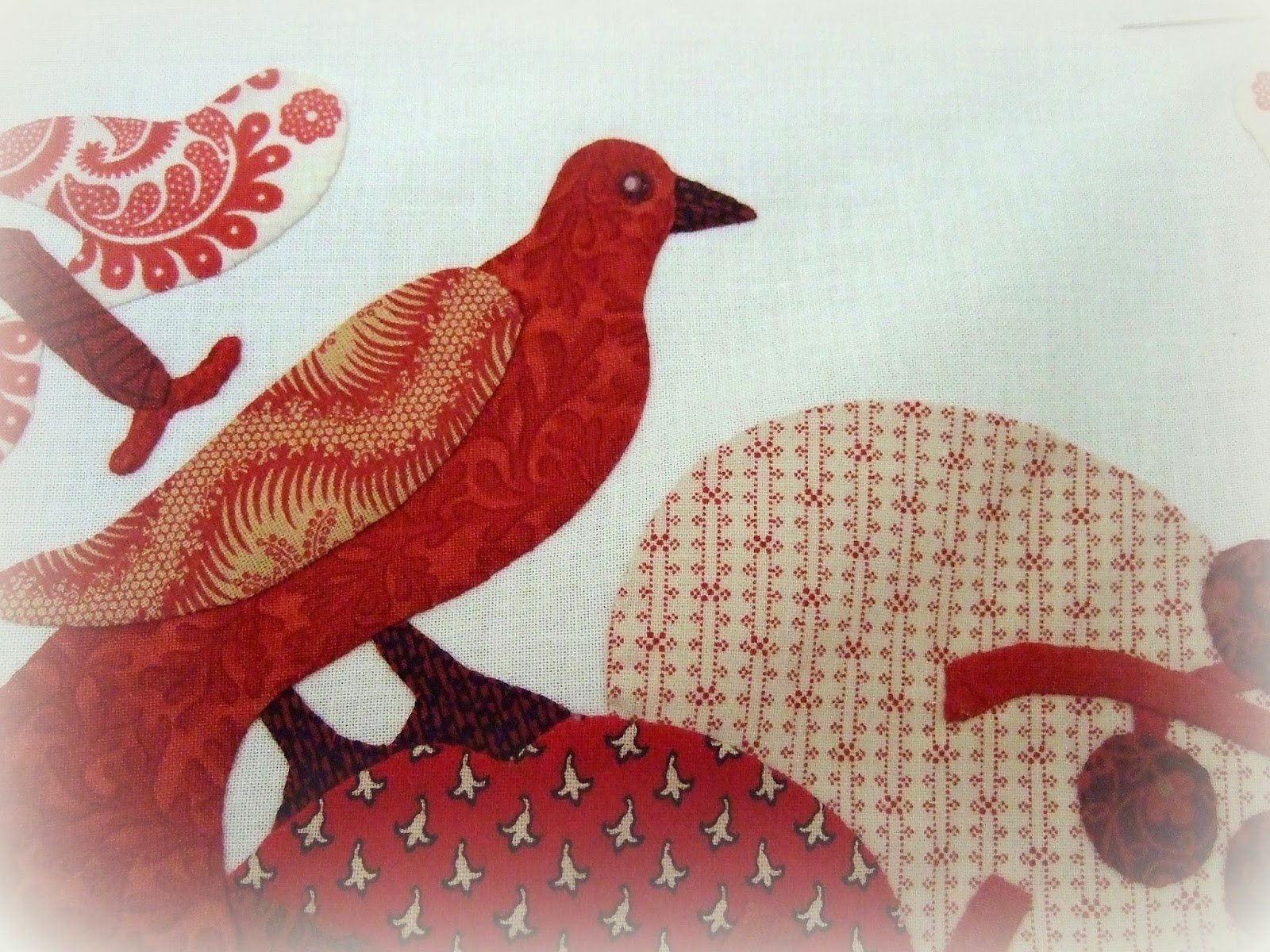 Can you see butterflies fluttering out of  this fabric? 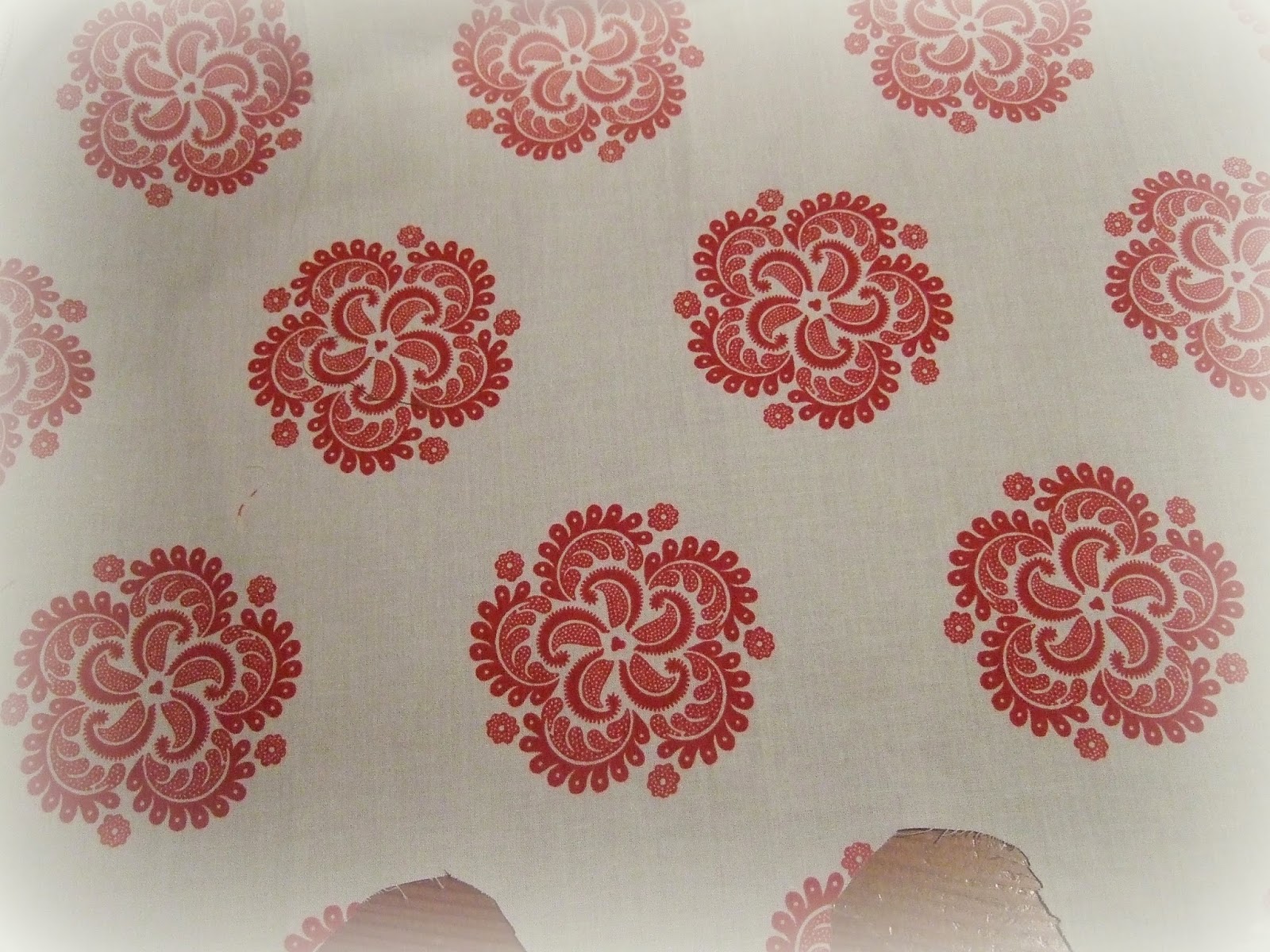 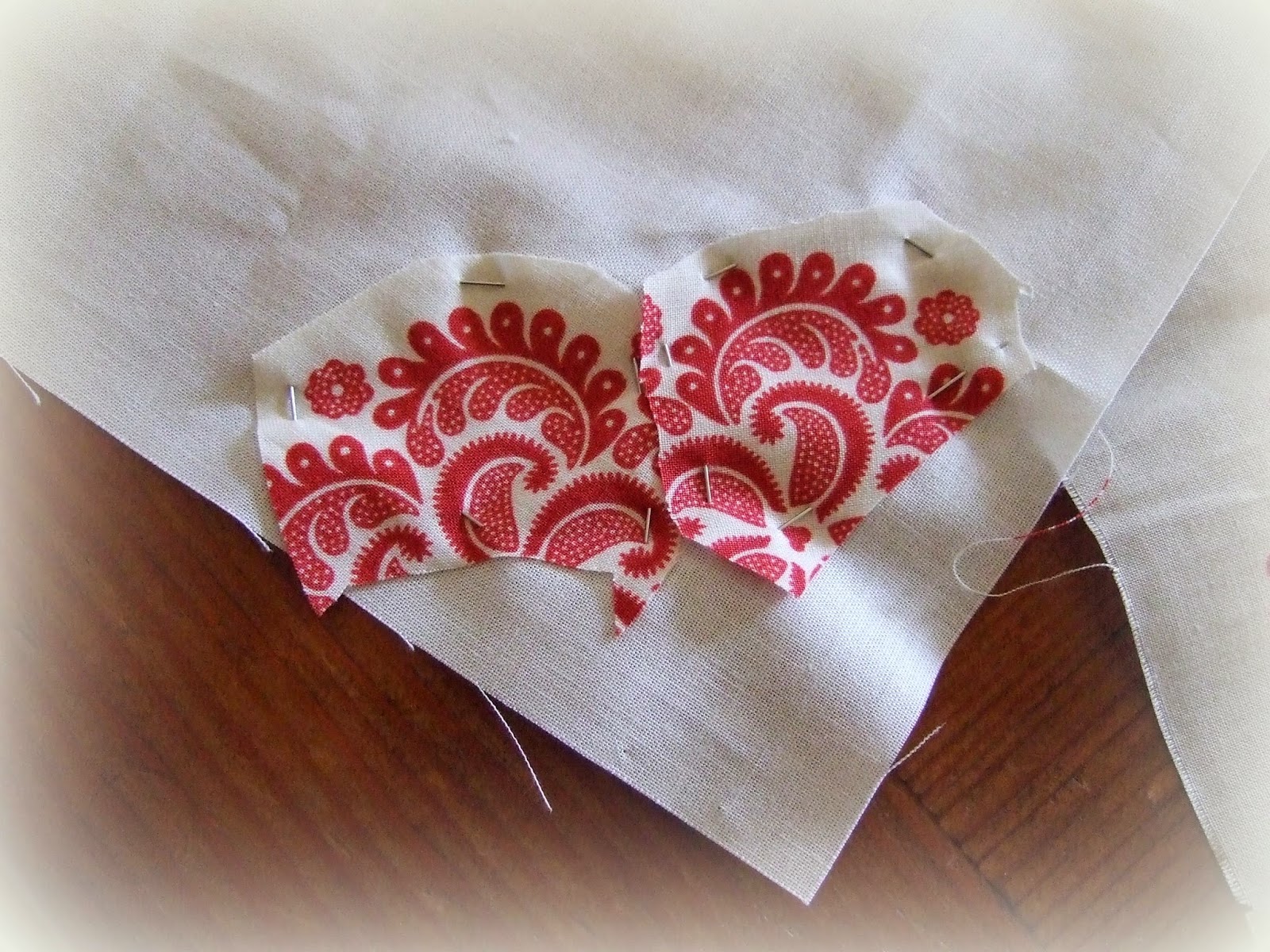 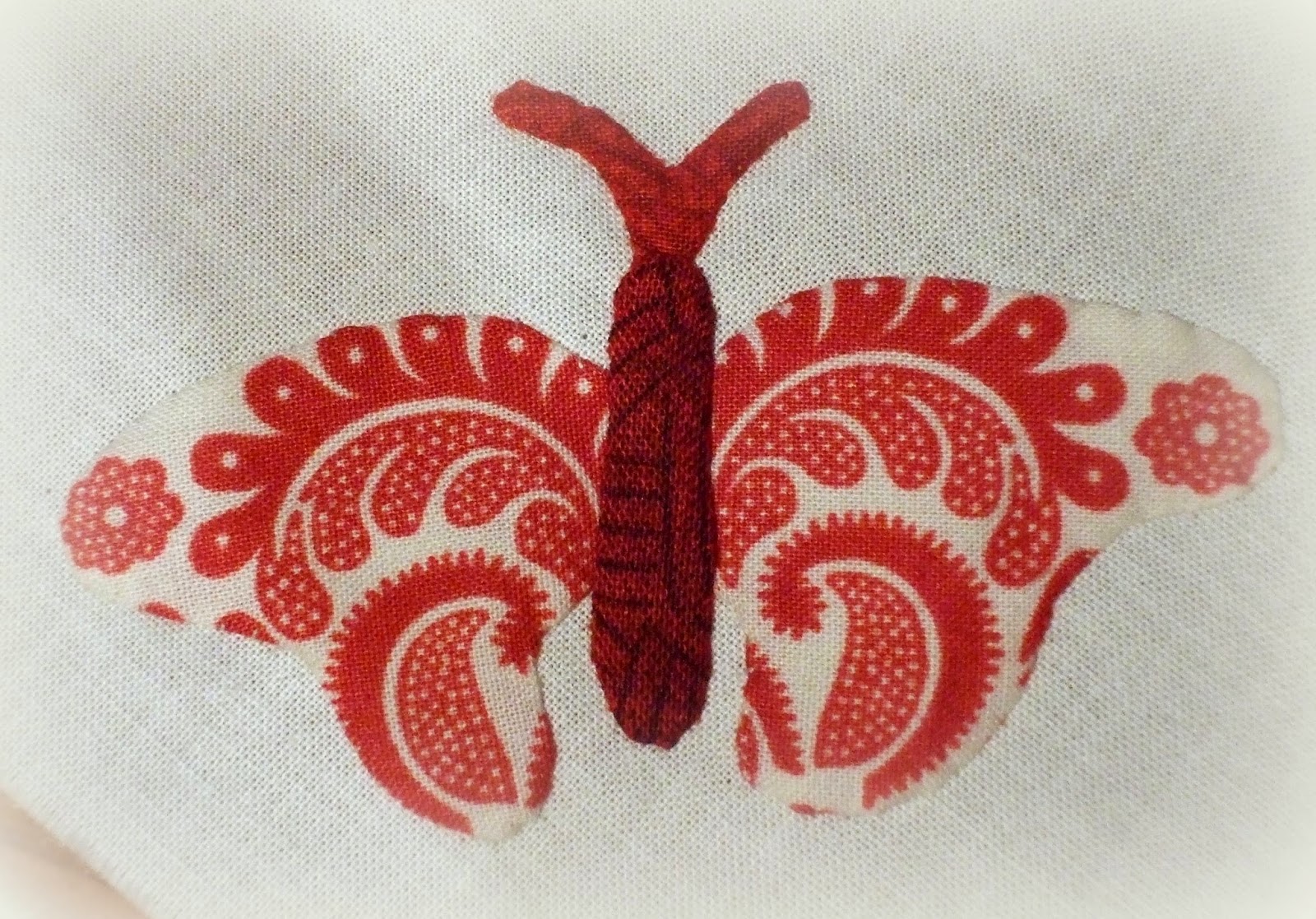 Another block to be changed...am not so sure about the eagles. This block (from the Threadbear pattern)..
...became this block by adapting the leafy branches and adding a rabbit and a butterfly: 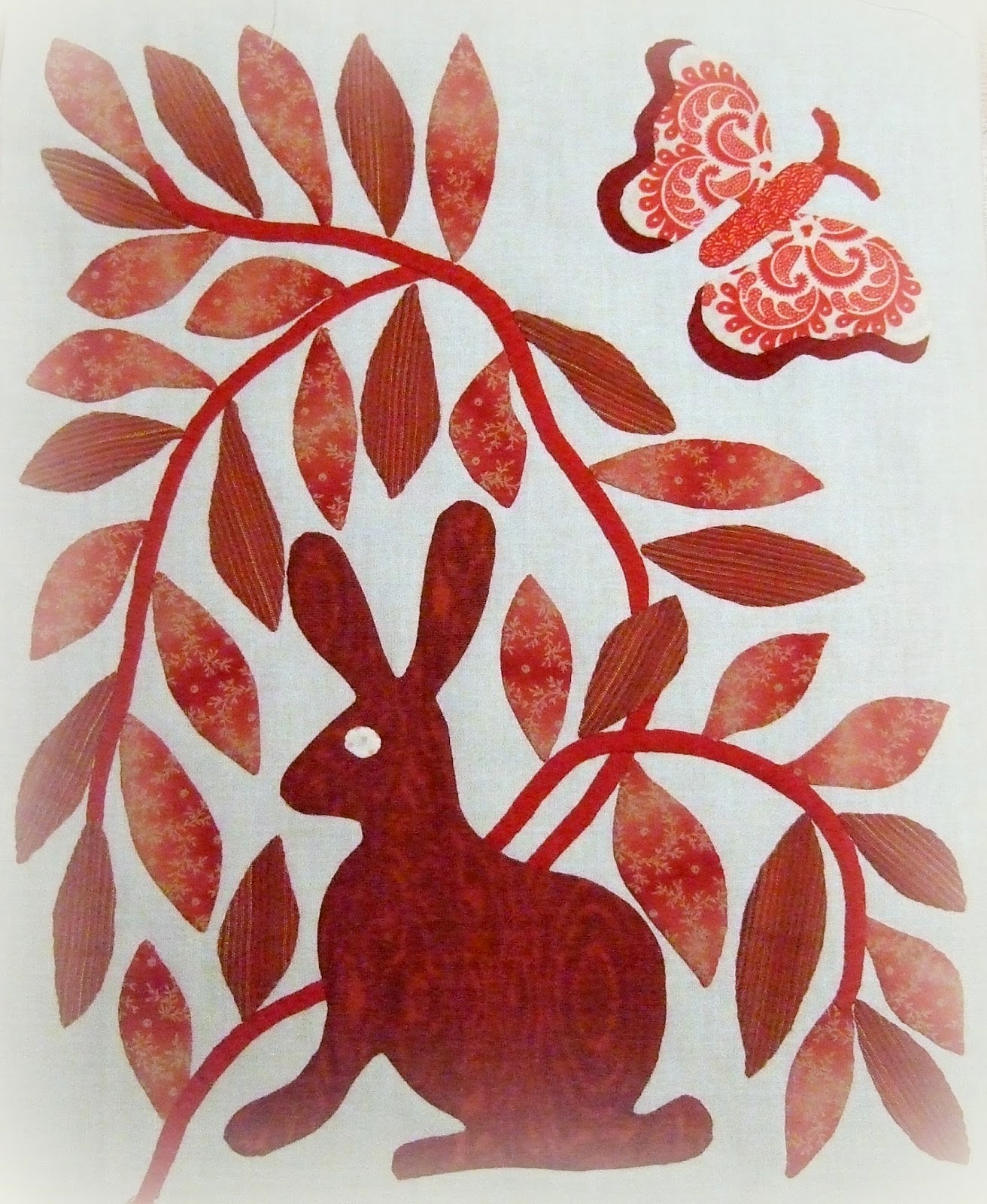 I decided the block with the horses and elephants was not for me (sorry - it is a fun block but just not what I want for my version) and needed a completely new block to replace it. So I went for another gentle creature - a squirrel - and borrowing the oak leaves and acorns that were in an earlier block - remember this one completed a while ago? 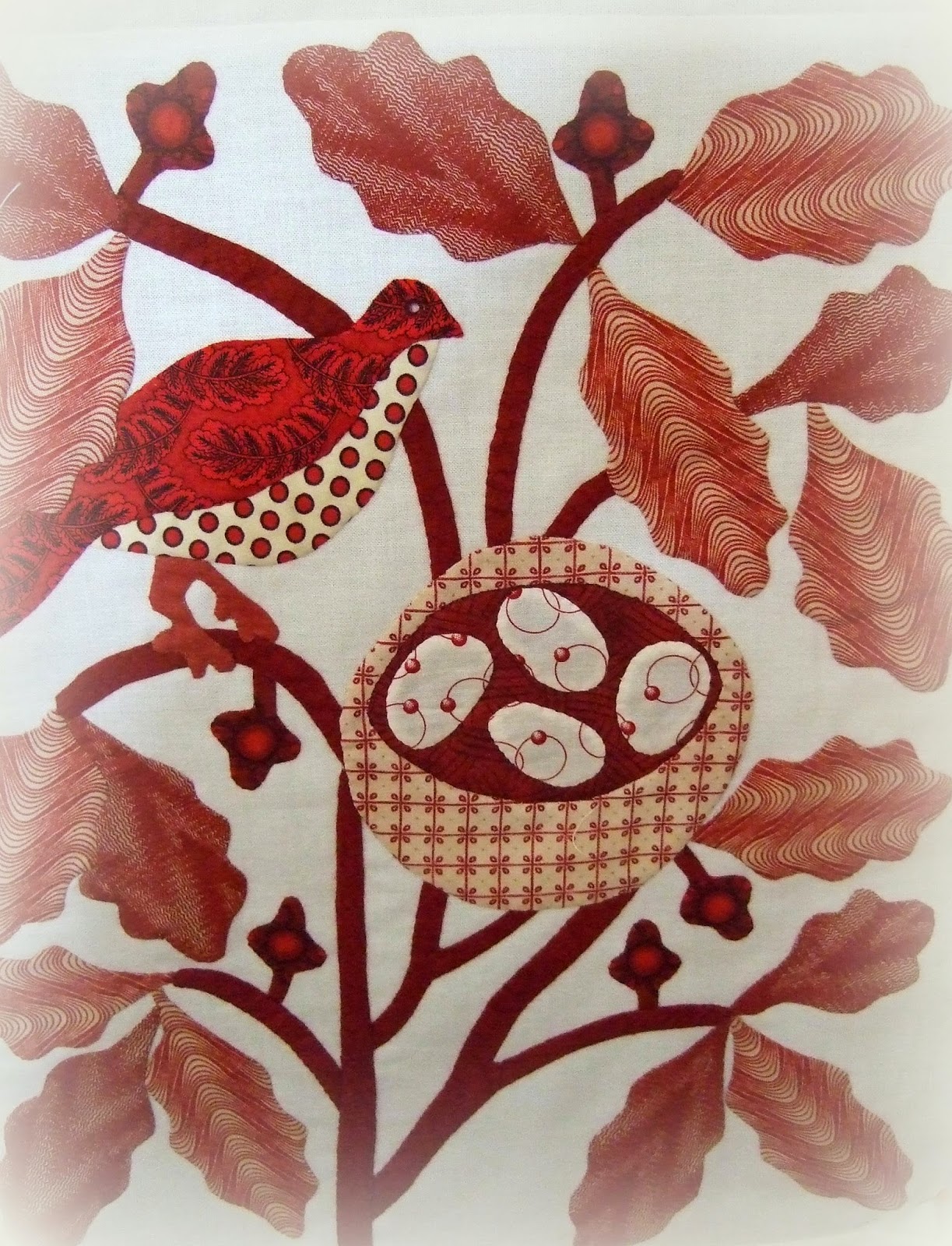 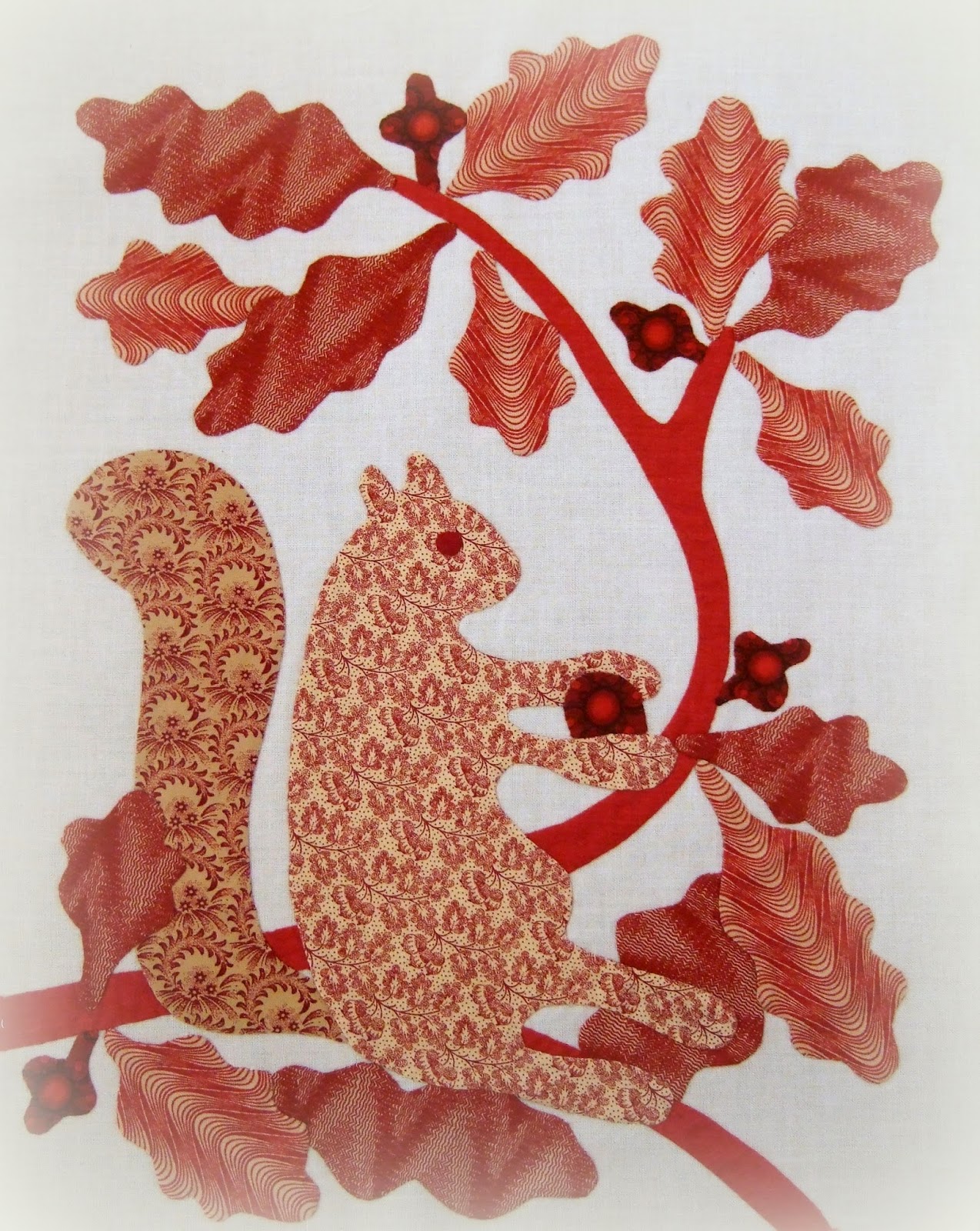 It seemed fitting to use this fabric for the squirrel's body.. 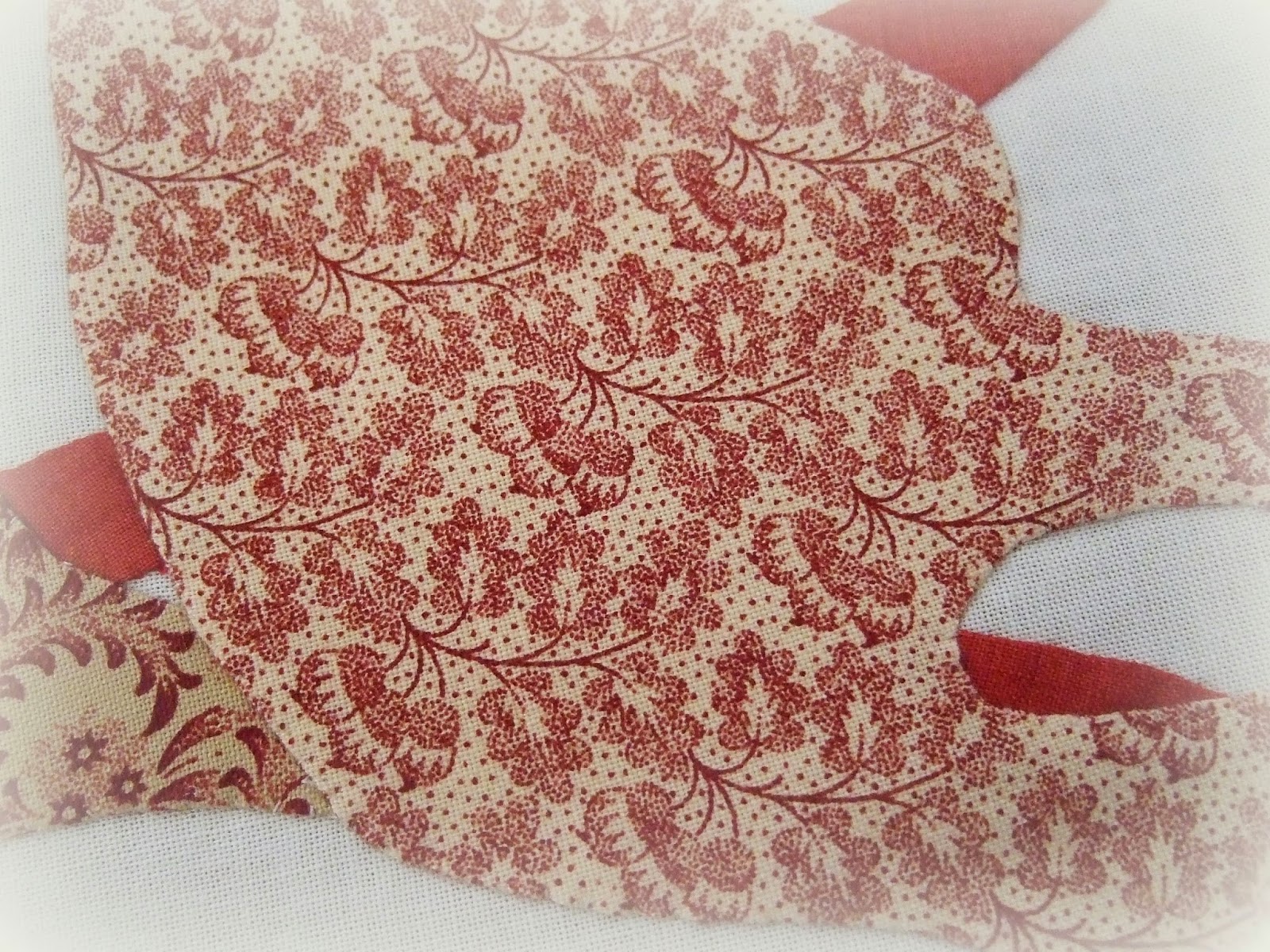 Having made these changes there were only two more blocks to finish!
The second last ...with lots of berries. 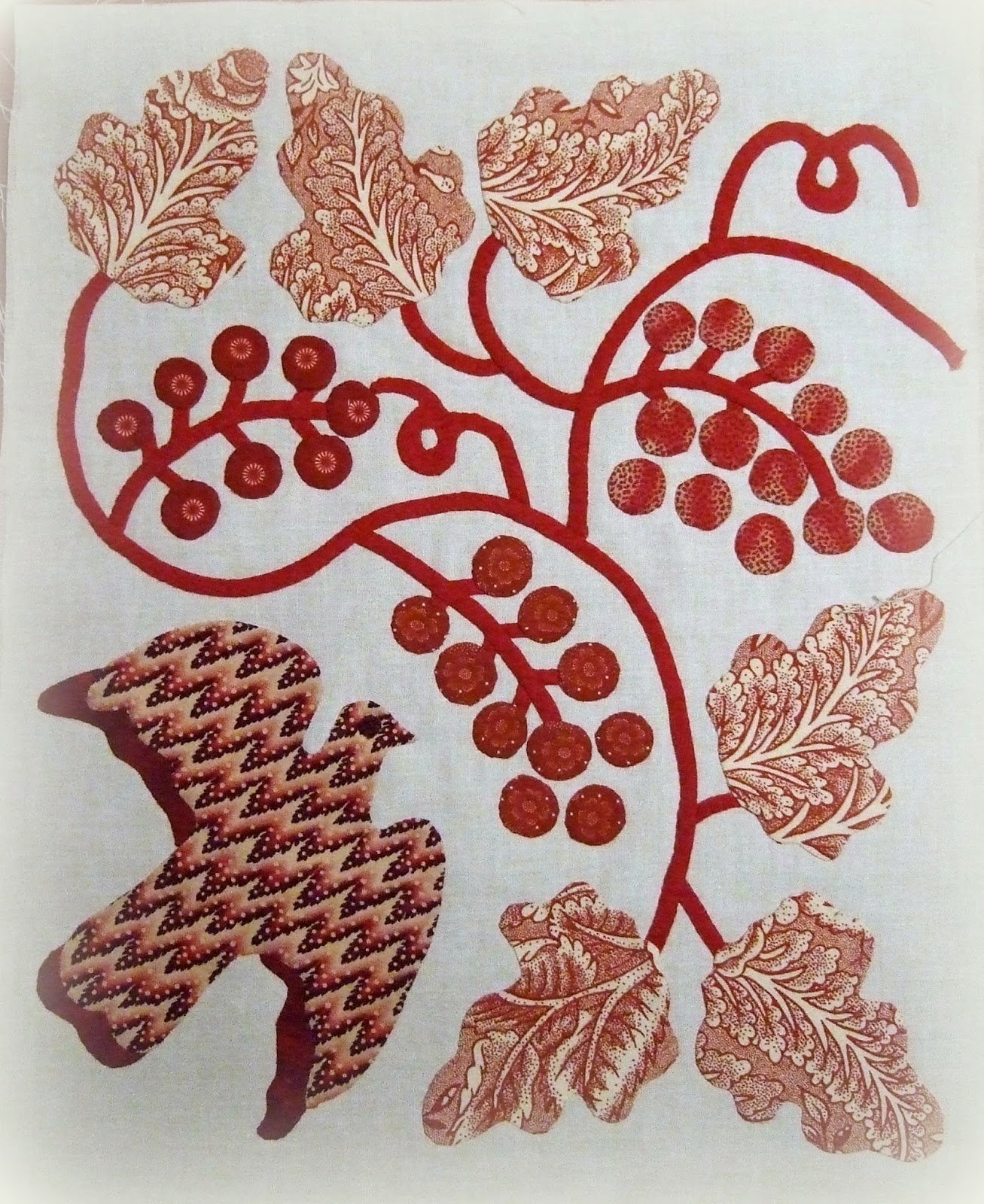 The last block ..back basting prep for needle turn applique - looks chaotic but there is method in there and I find it works a treat. 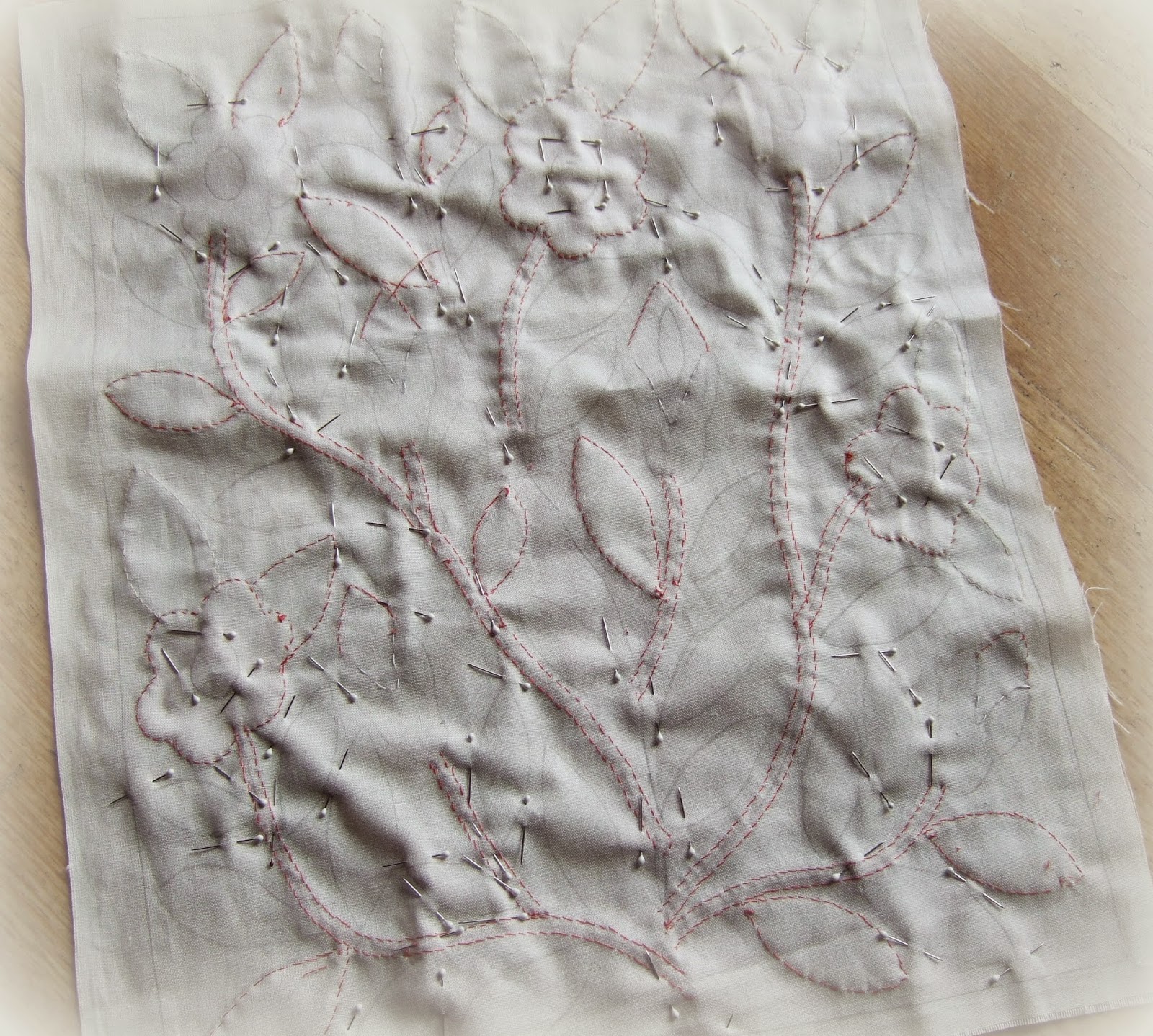 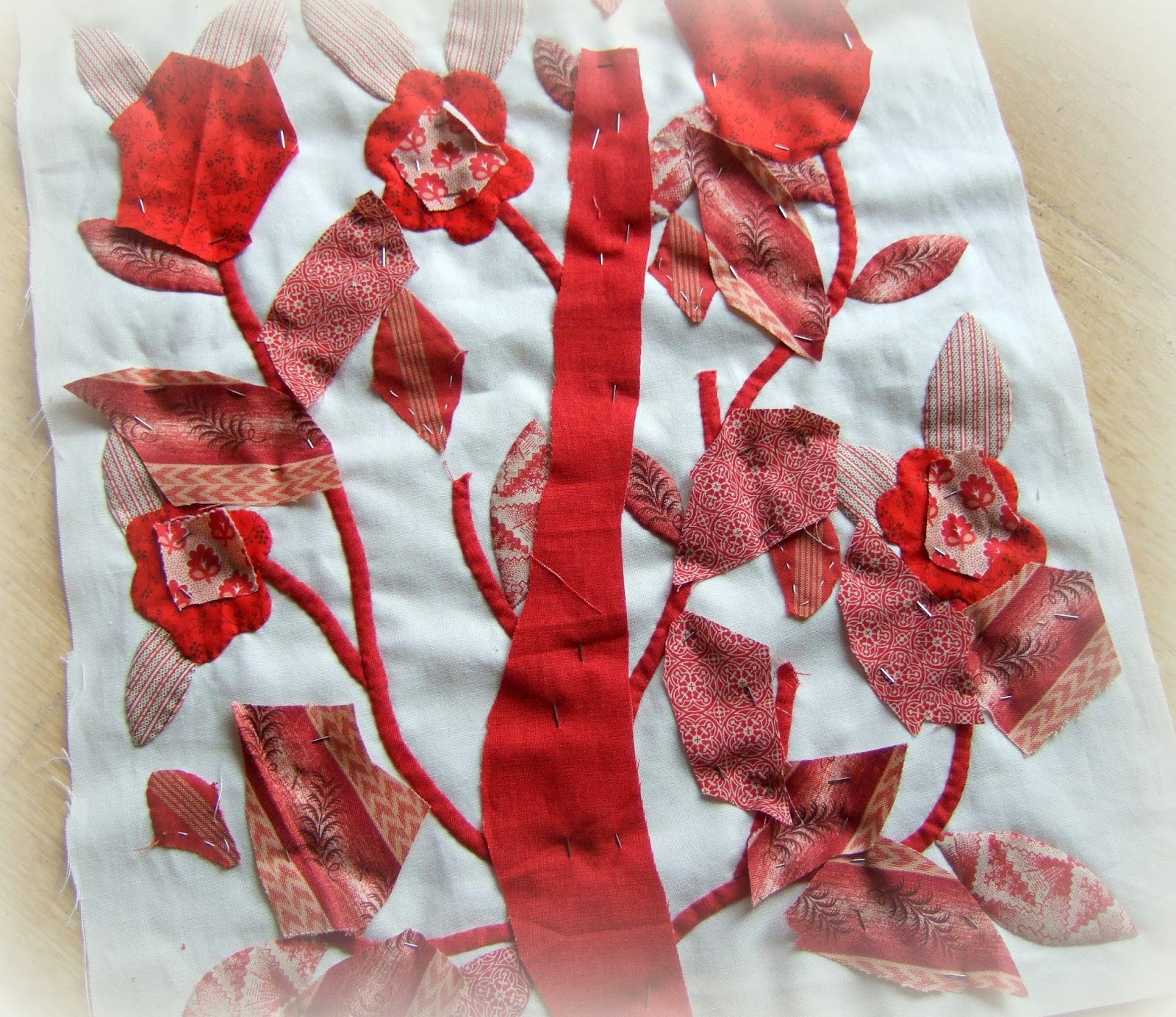 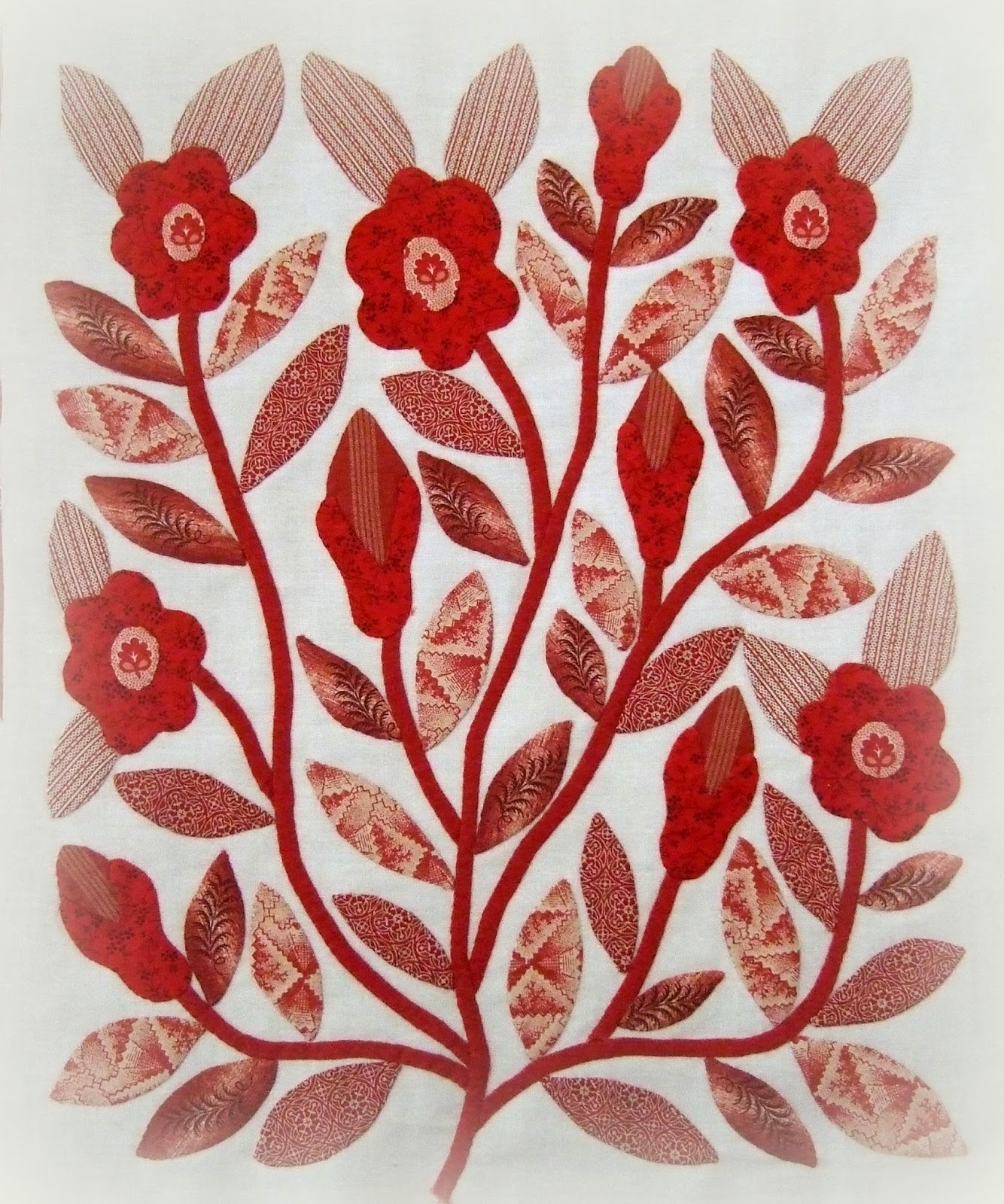 Just a note on eyes - for all the creatures in the blocks. I had left a lot of them 'eyeless' but in the end went back to add eyes and I like how they look. This fabric was handy for the smallest eyes - an old line from In the Beginning fabrics: 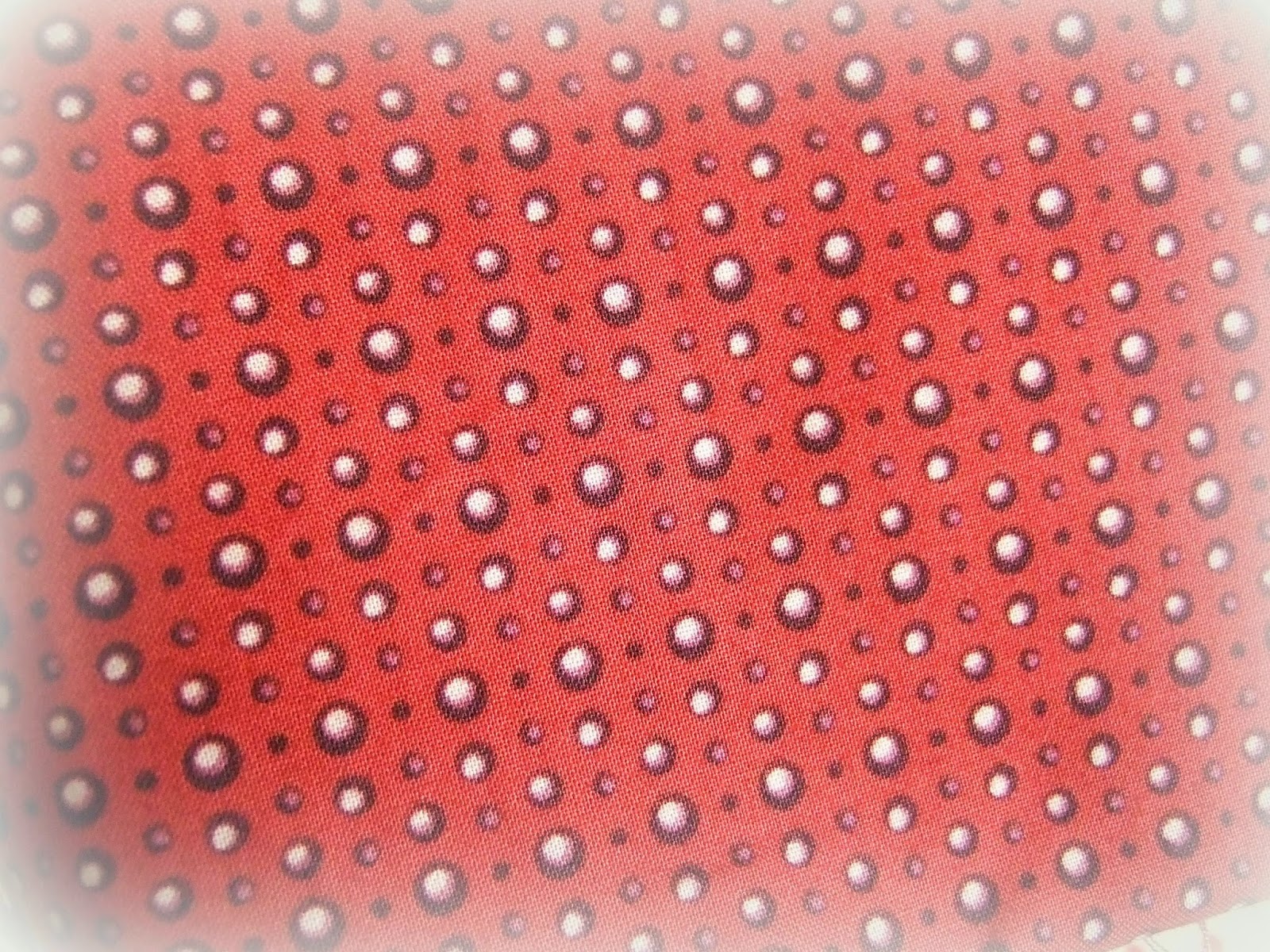 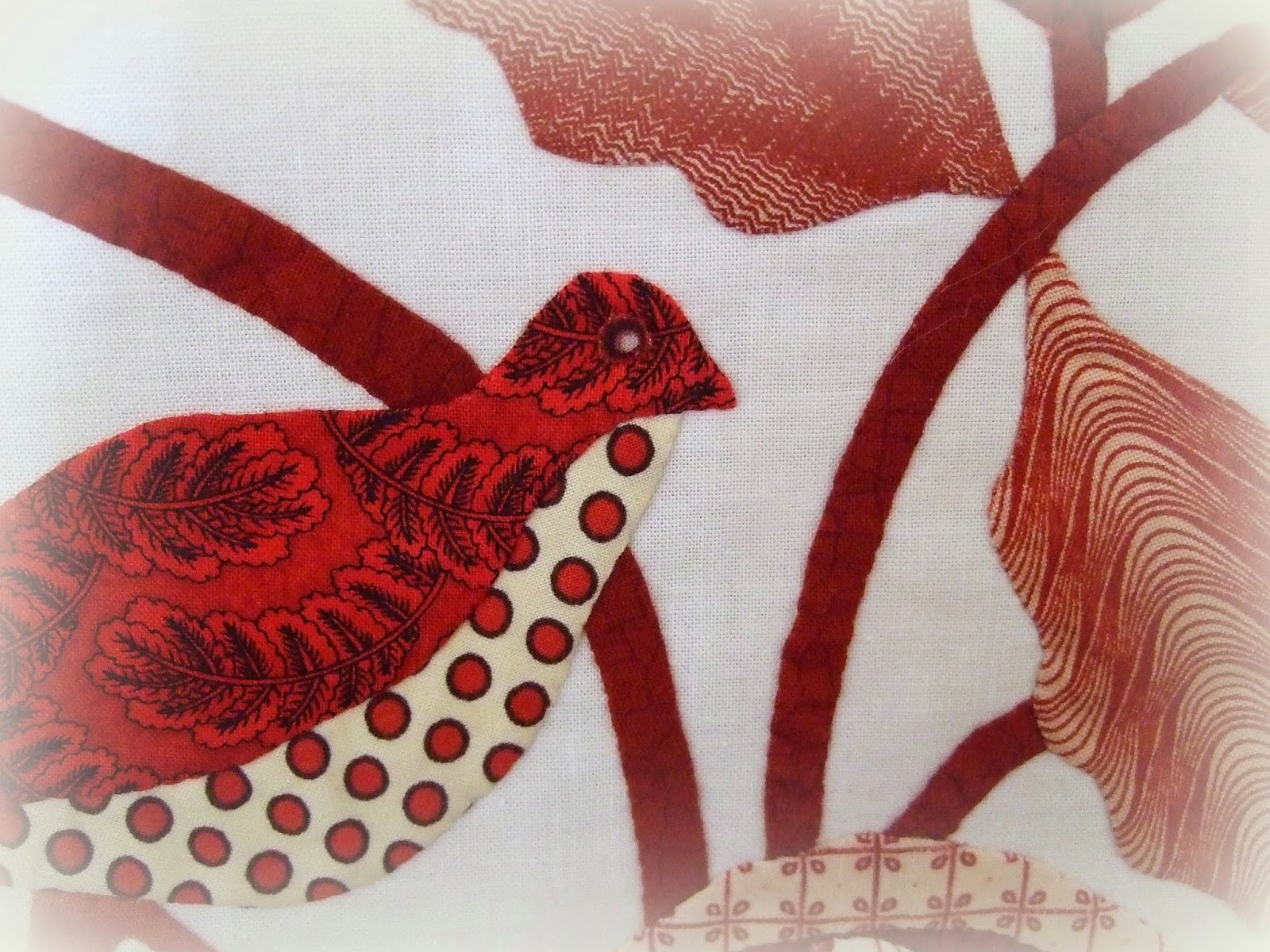 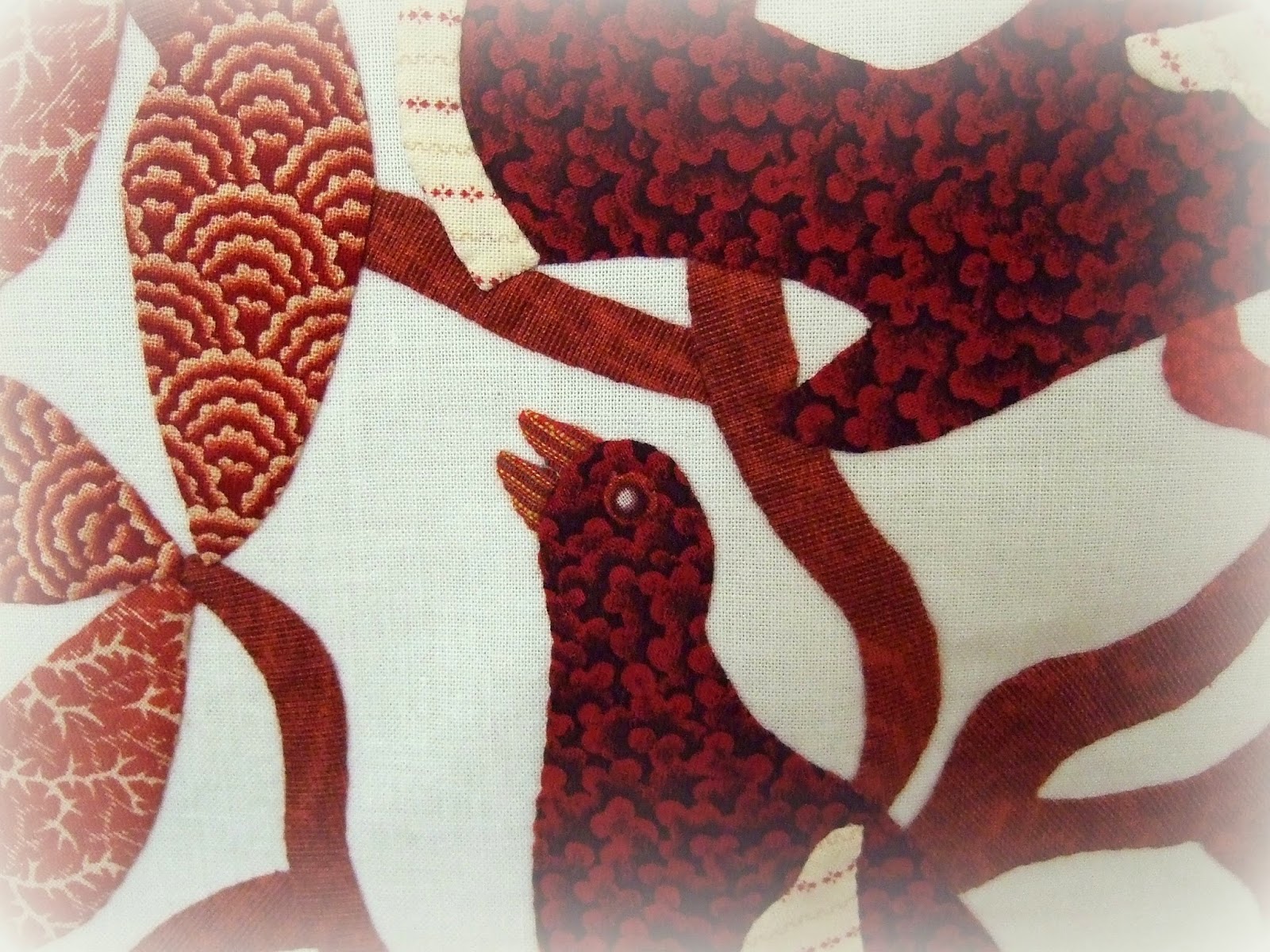 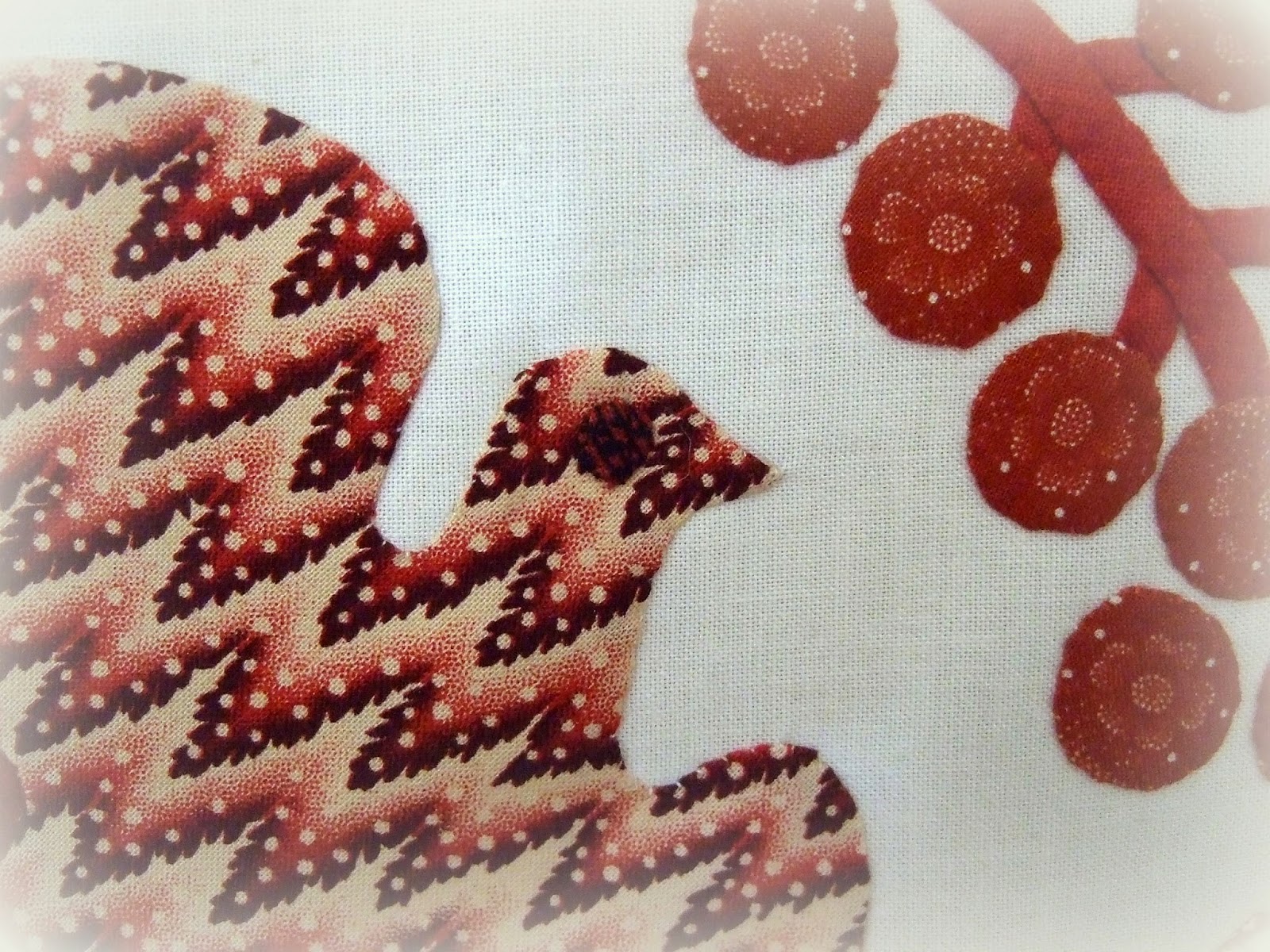 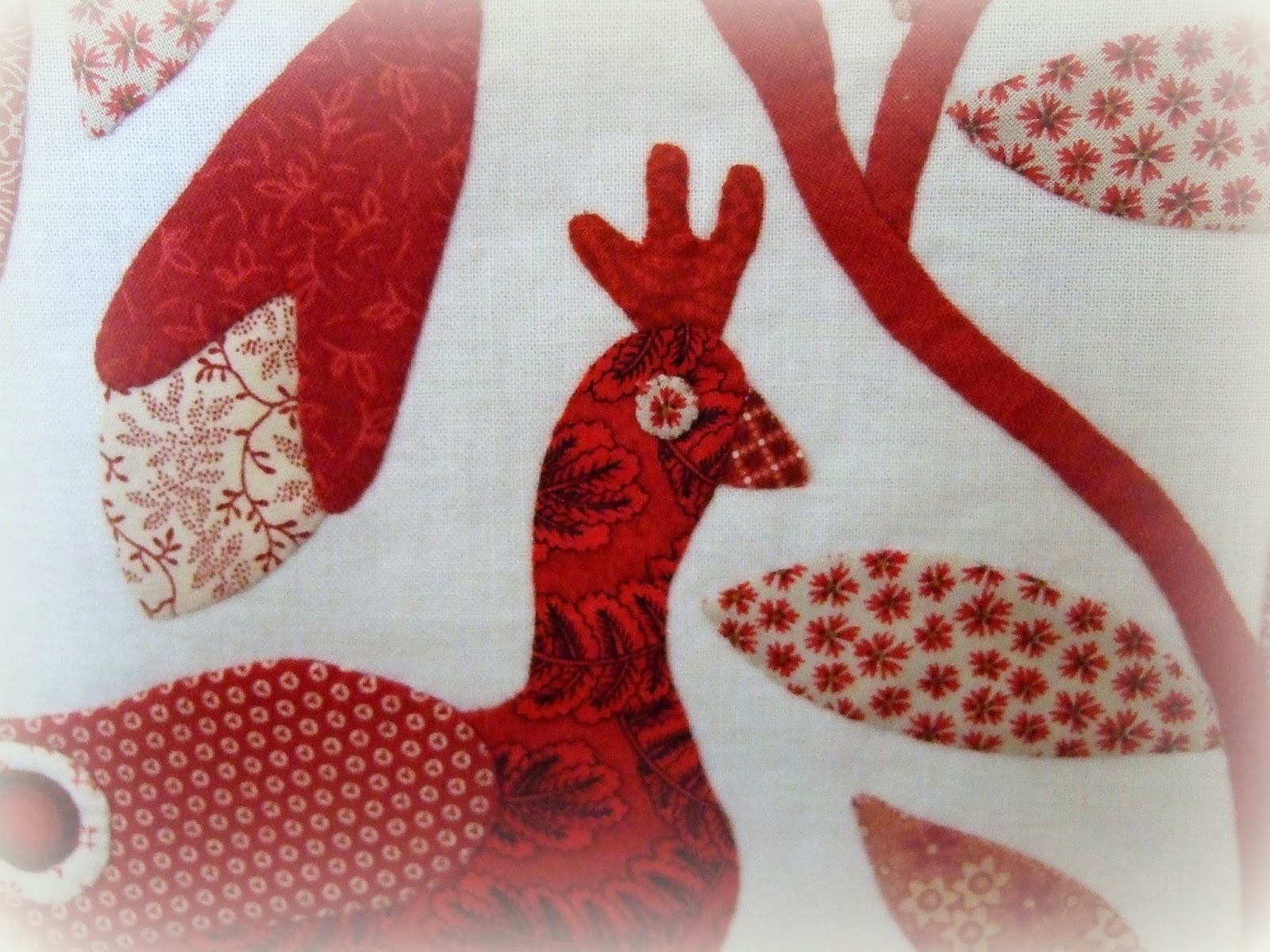 So all the blocks were done and all I had to do was lay them out and stitch together...sounds easy? But I can tell you it took some fiddling around to achieve a relatively balanced feel - not just balance in value, but also the style and subject of the blocks and the fabrics used. I thought it would be nice to have an urn in each corner. Not sure I have achieved a value-balance but now they are stitched together and that's how they'll stay! Once a border goes on it should draw it all together better. 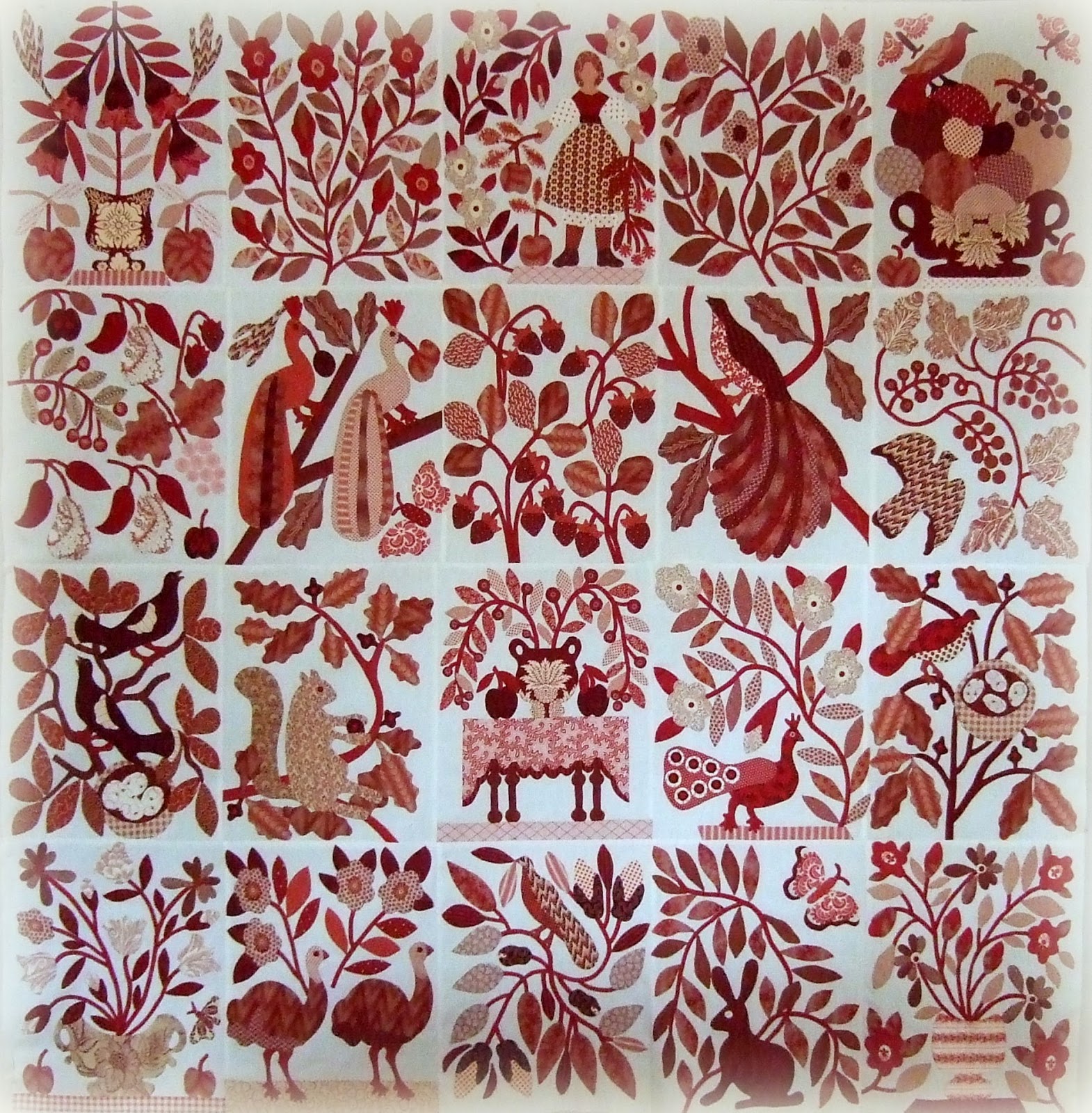 Next is planning the border - could go with some elements from the original or I'm thinking maybe lots and lots of scrappy leaves on a trailing vine.

Here is a little family of tubs I made recently when a friend came over to stitch for the day. Many thanks to Kyle from Timeless Reflections for the inspiration and the link to the free pattern. They should take only an hour each to make - and I'm pretty pleased to have three made in a day, despite all the chat going on! 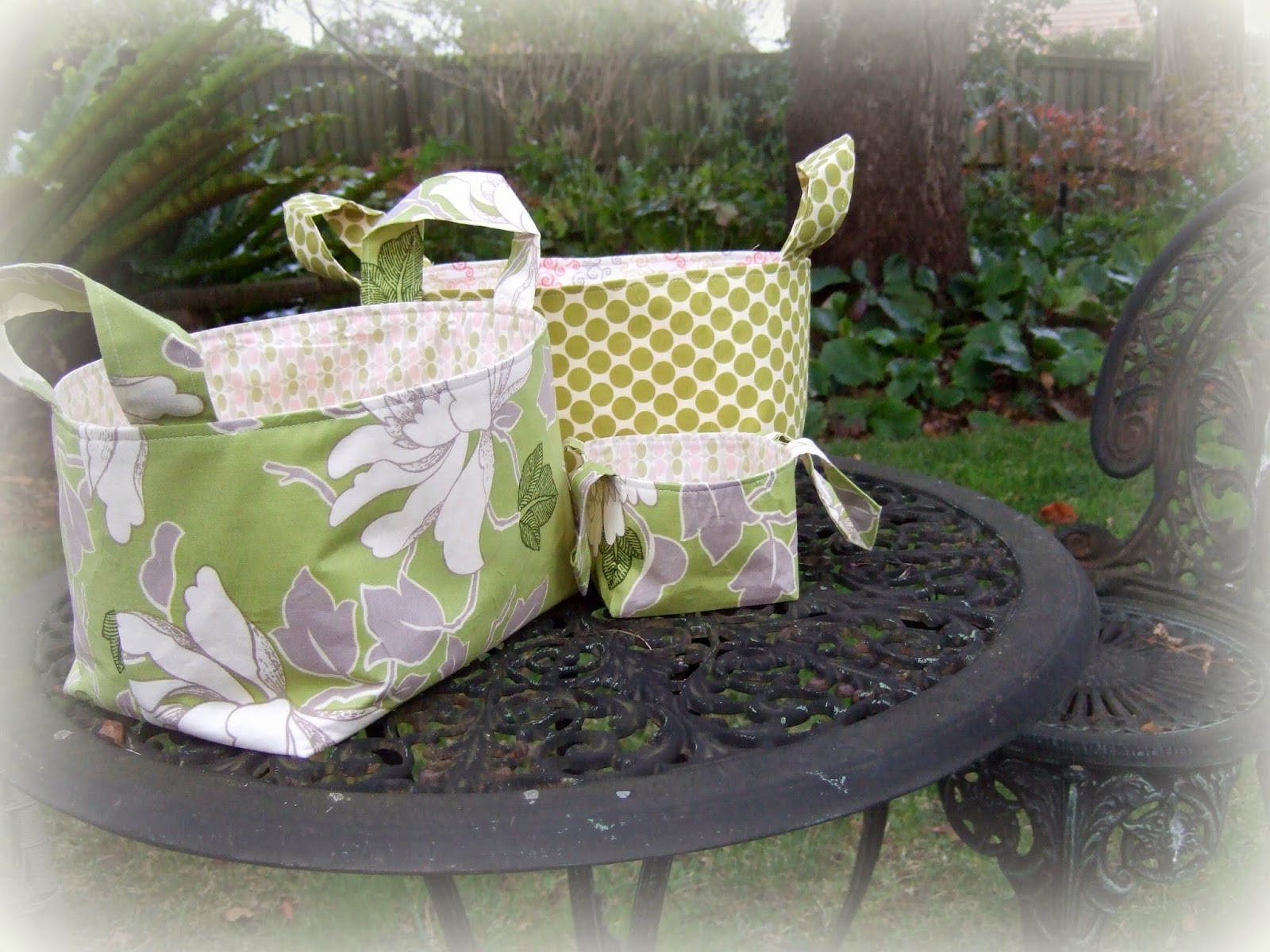 There is a lot of work to be done in the garden - trimming back perennials after their autumn flowering. But I am holding off as garden visitors are still munching on the seed heads. The crimson rosellas love the salvias . 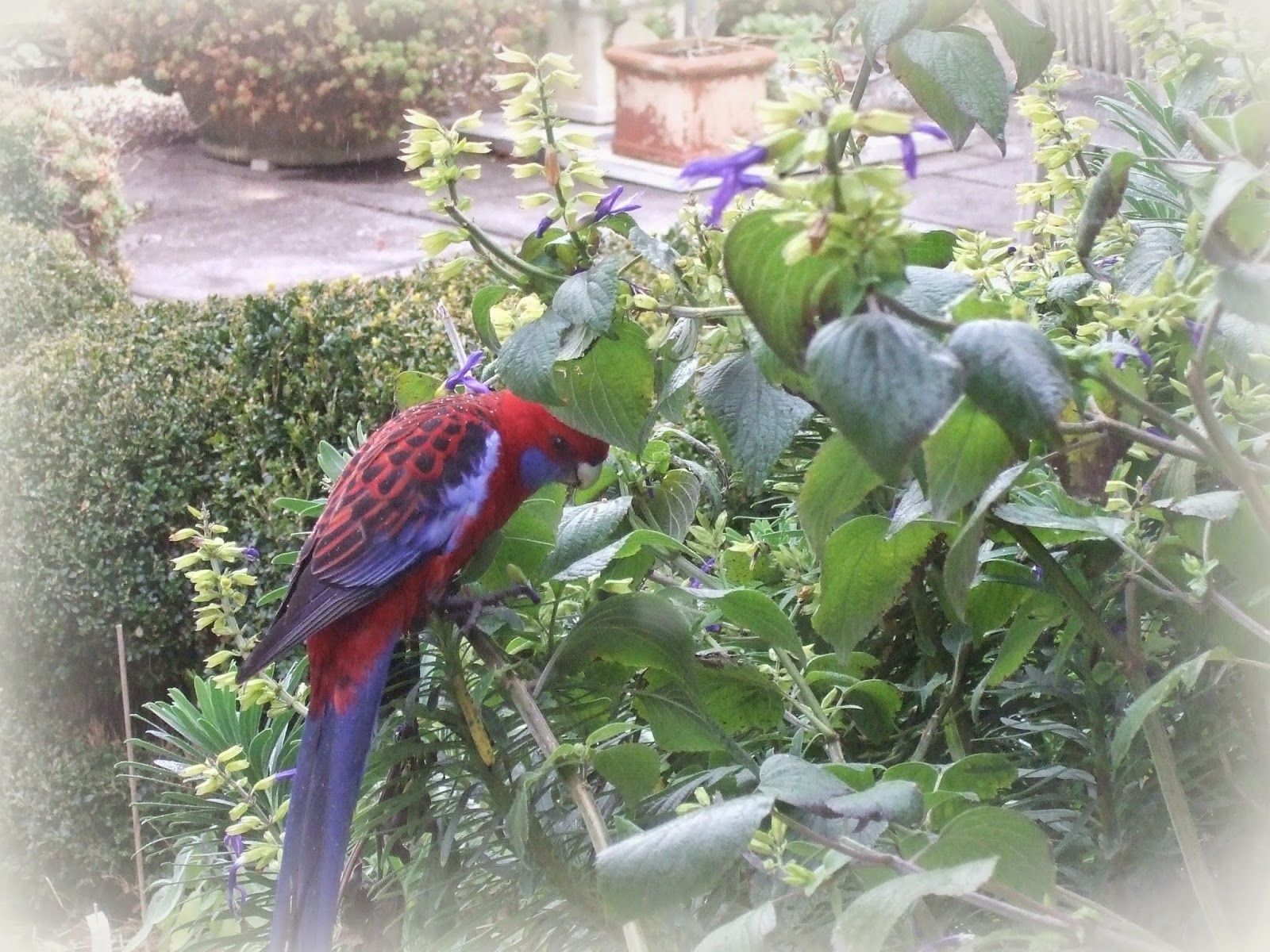 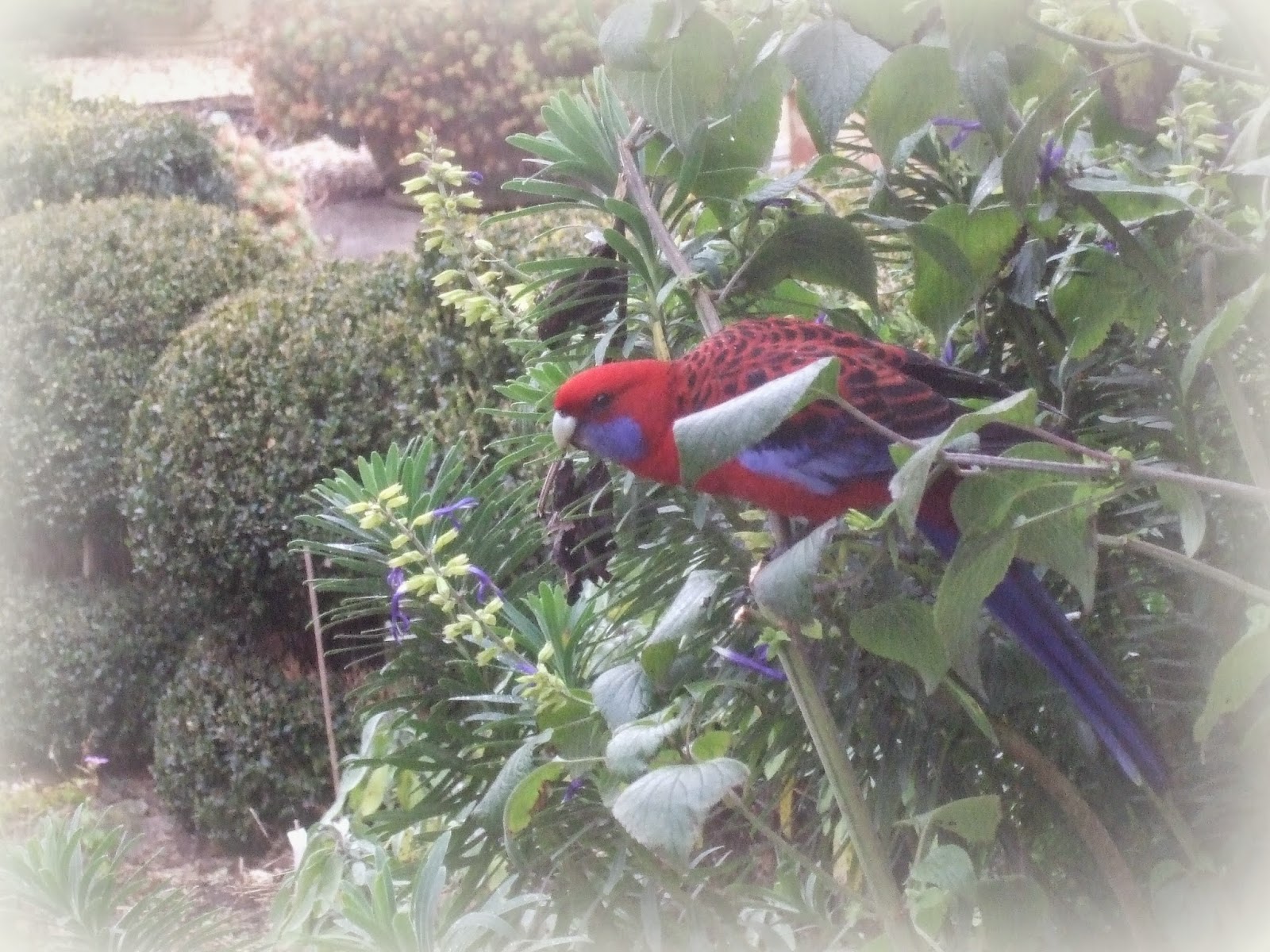