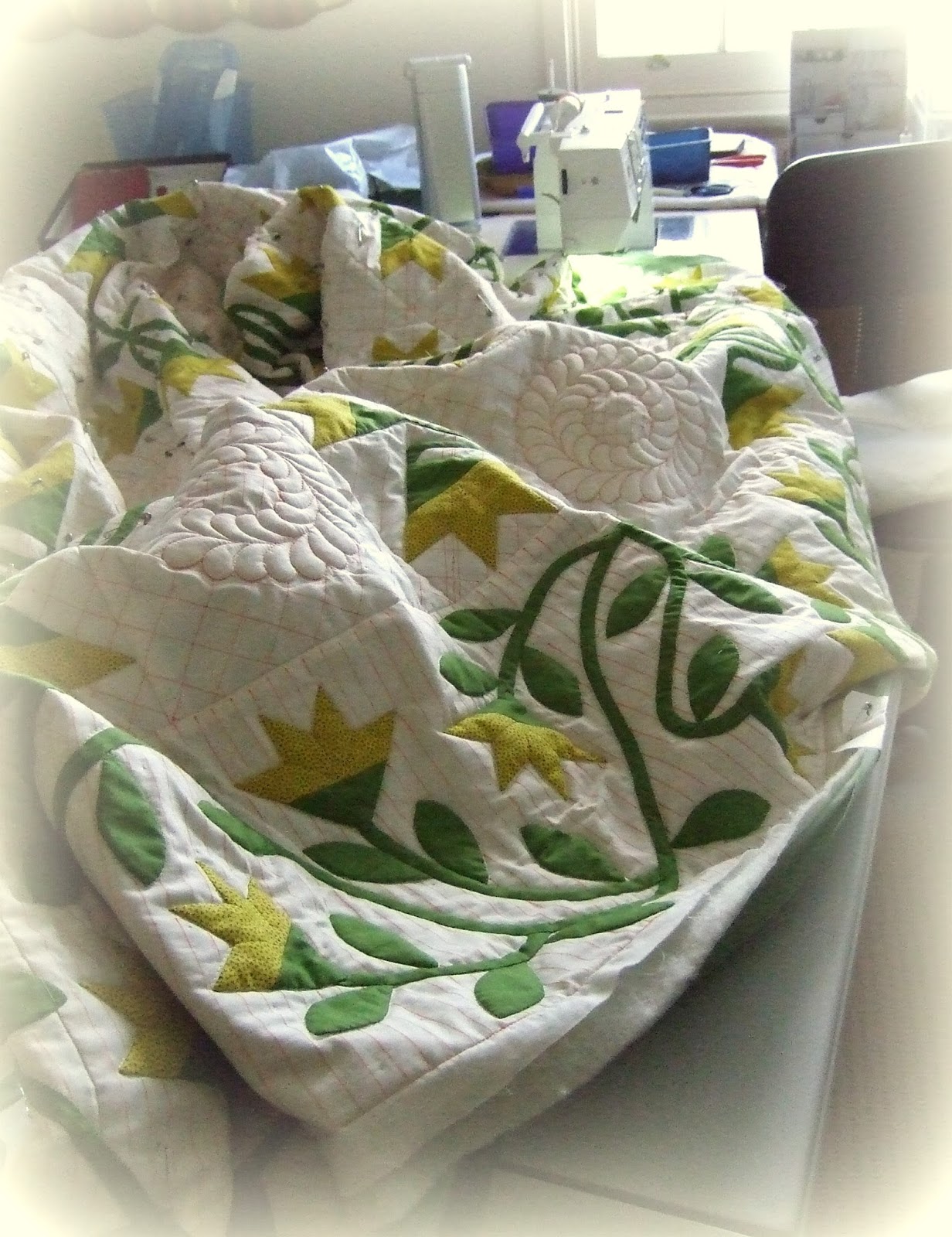 That's what I have been doing - hours and hours of it!
So far it is going pretty well thanks to a couple of fold-out tables added around the sewing machine -creating a nice big area to spread and manoeuvre the quilt.

This is how it started - sandwiched with wadding and backing taped to the floor. You can see  all the marking lines and trapunto wadding stitched in the wreaths. 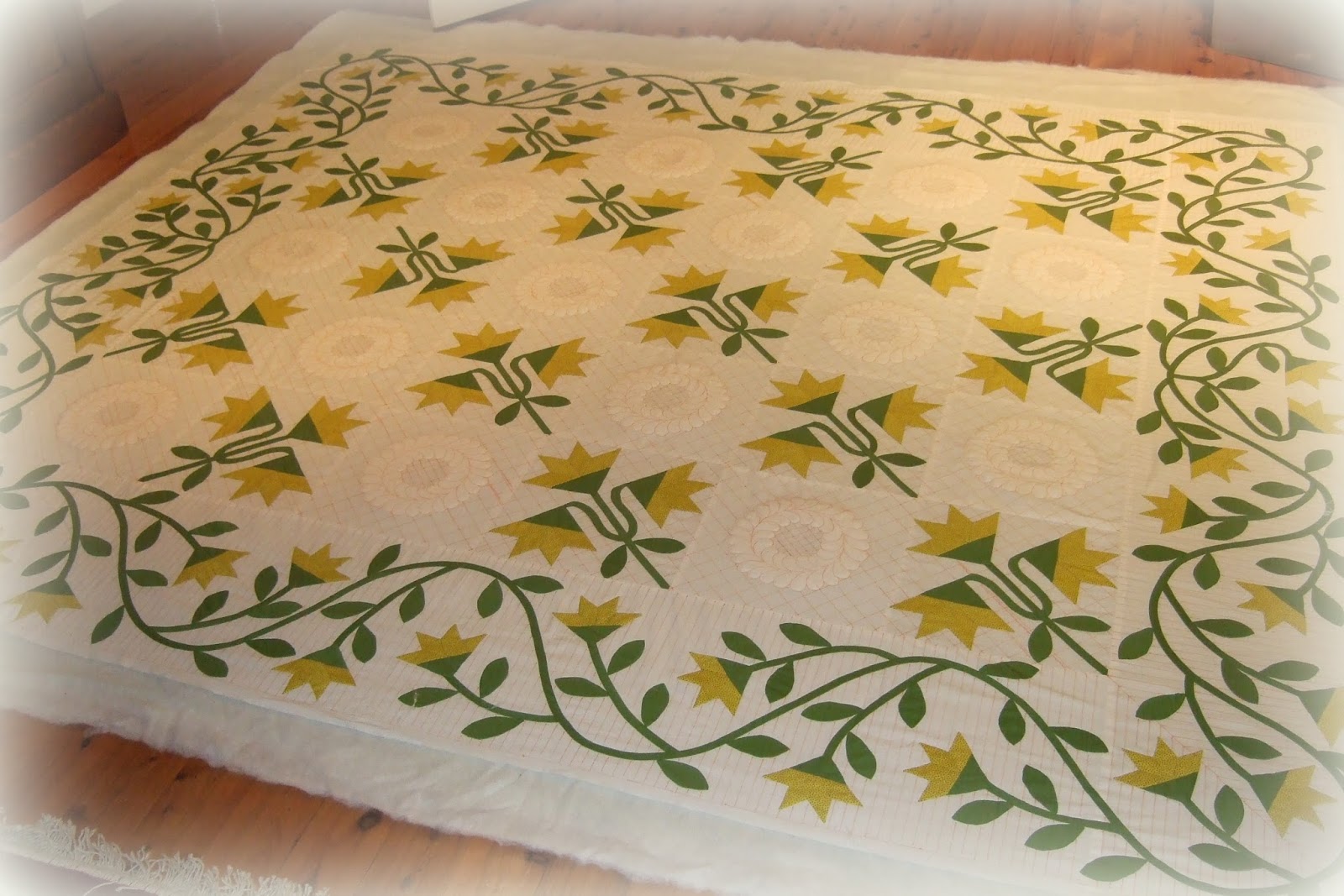 Then pinned together and wadding trimmed back a bit to be manageable. 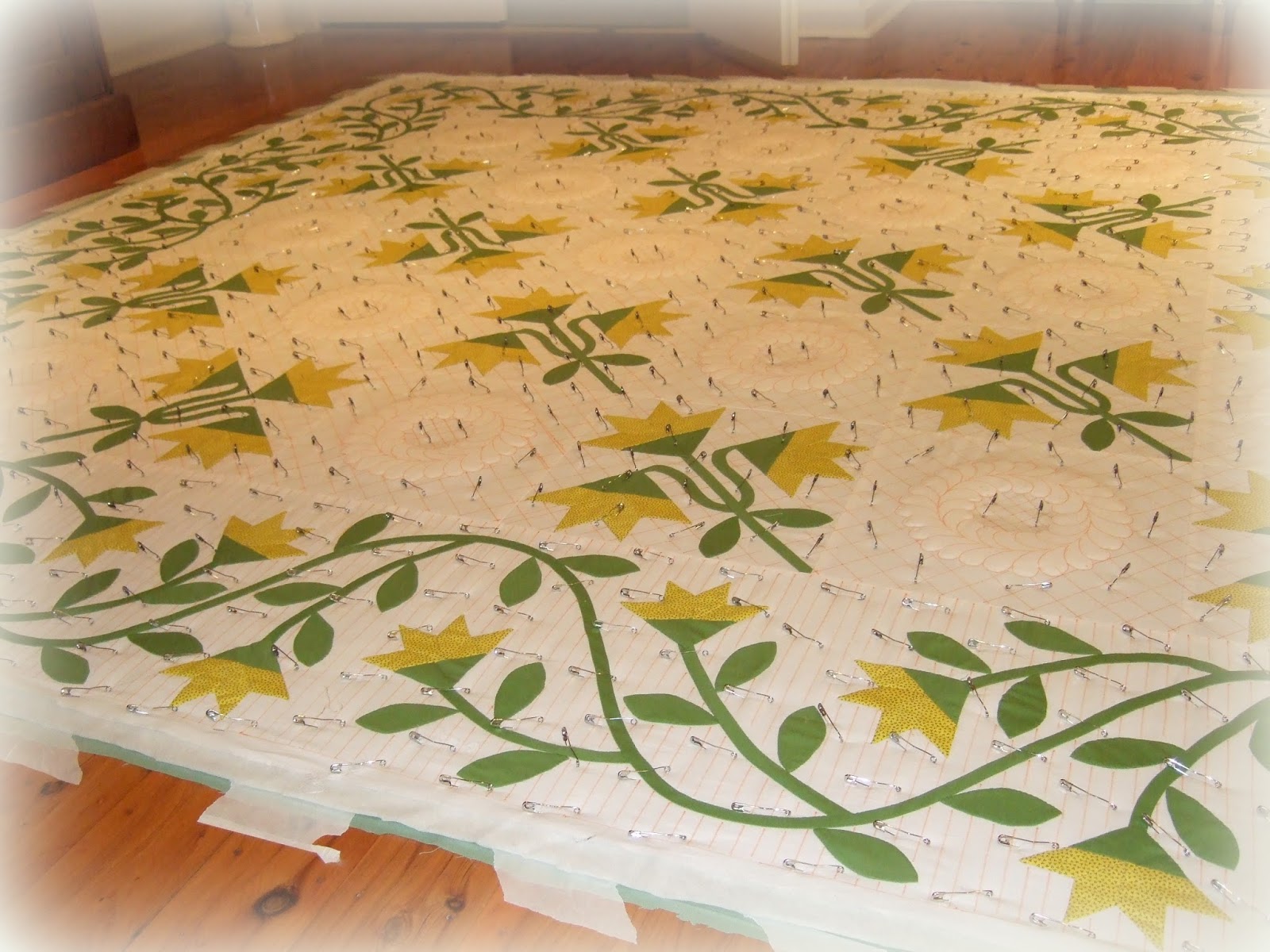 The first bit of machine quilting ( and I find it so important to do this bit) is the stitching in the ditch between each block to stabilise the whole quilt.

Then I free motion quilted an outline close around all the applique - that was really enjoyable as it became three dimensional.

I also quilted the wreaths:

And now I'm working on the outer border -  half inch parallel lines. This is rather tedious and time- consuming sewing, but not difficult. I am sewing this (with the walking foot) as background quilting "behind" the vine applique (not over the top). This means a lot of drag and sew, which means a lot of threads to be trimmed off front and back - very therapeutic (up to a point ...sigh)

Looking neater with the threads trimmed: 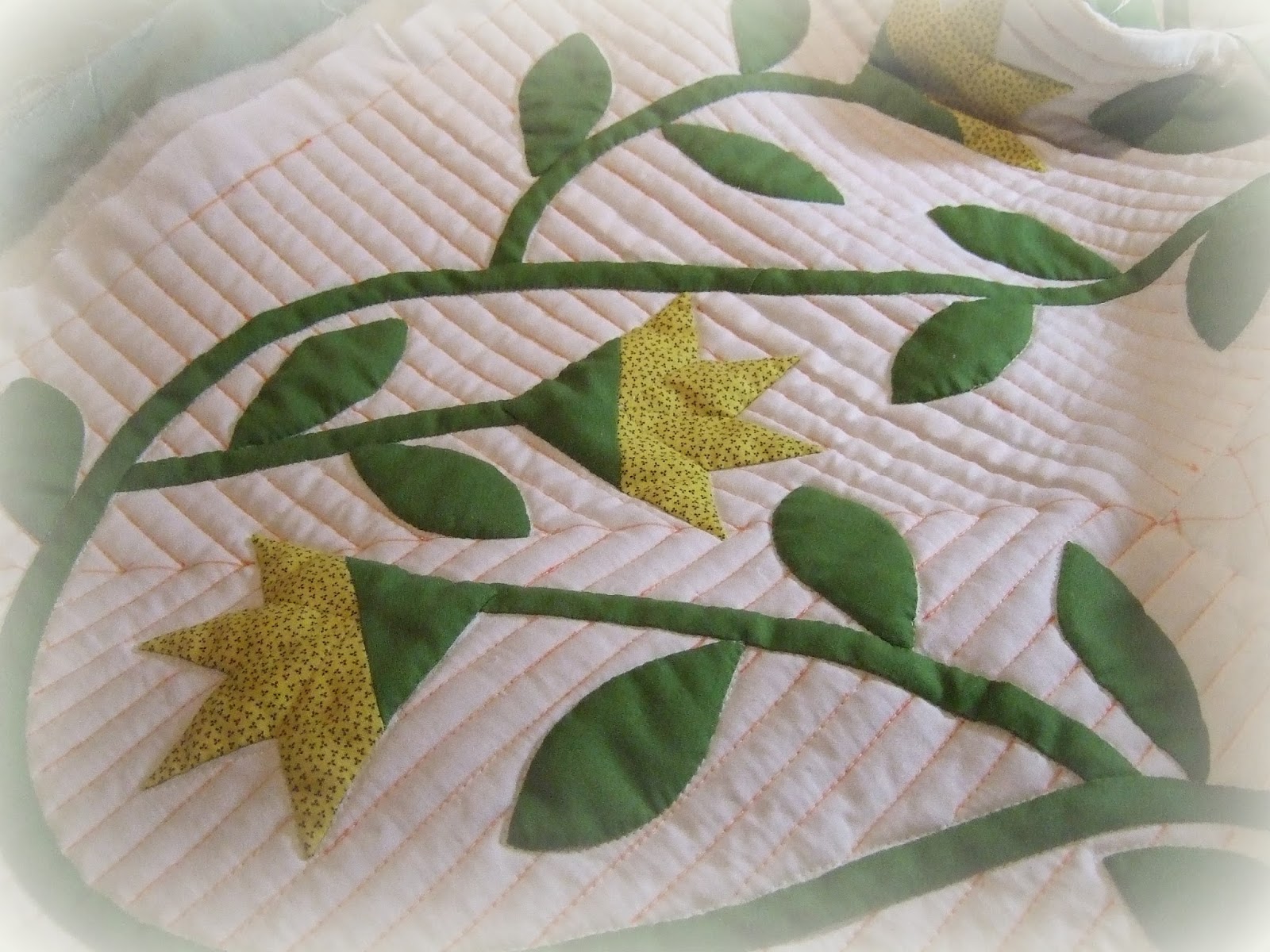 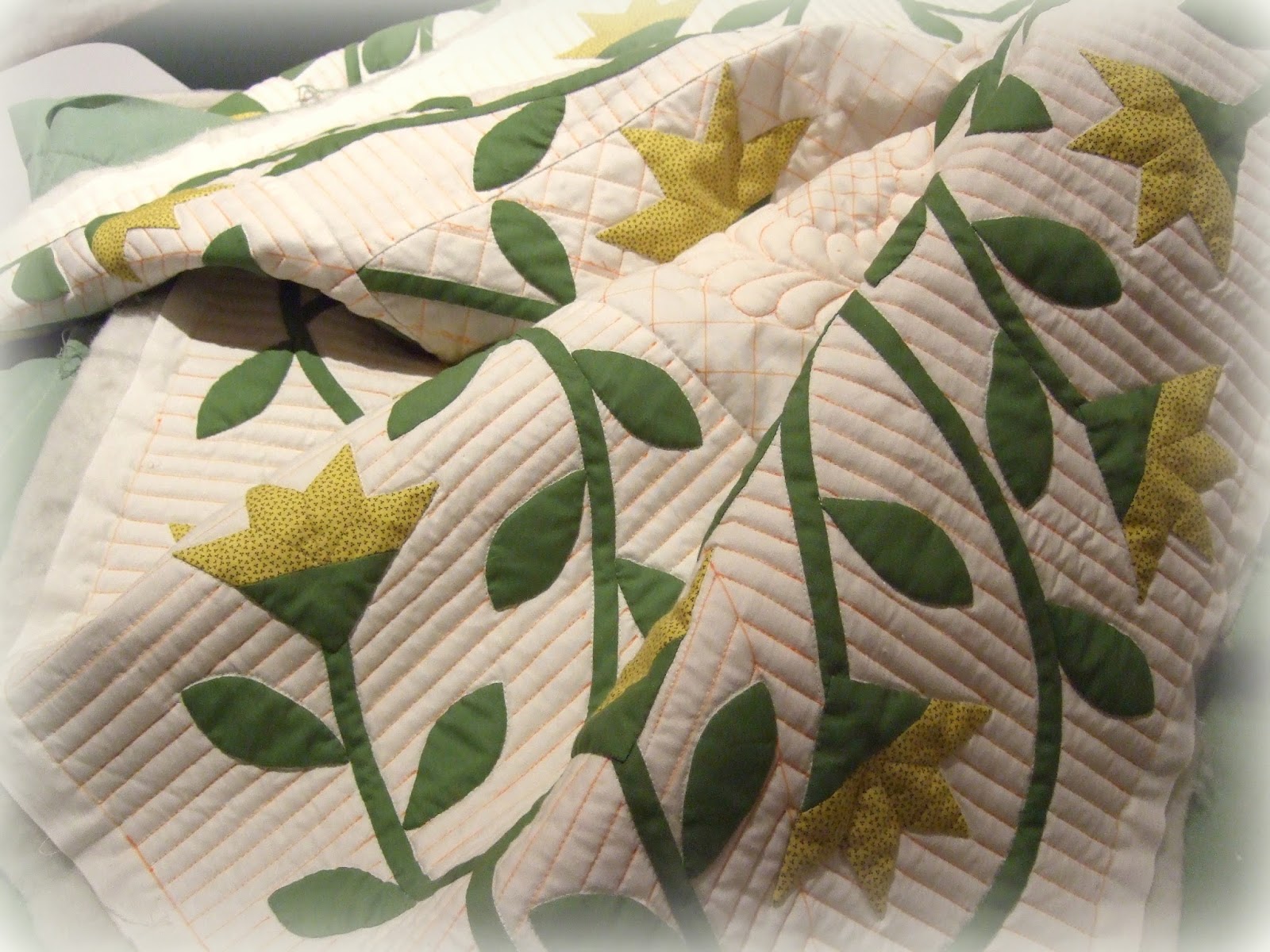 I will be happy if  when all the pen marking is washed off - I'd like those lines to look a little more subtle!

Once the border lines are done then I'll quilt the 1 inch grid over the rest. It will again be "behind"  the lilies so more threads to trim.
It is also an angled grid so the quilt will have to be passed on point through the sewing machine. That could be interesting - not done that before! I might not be surfacing for quite a while....